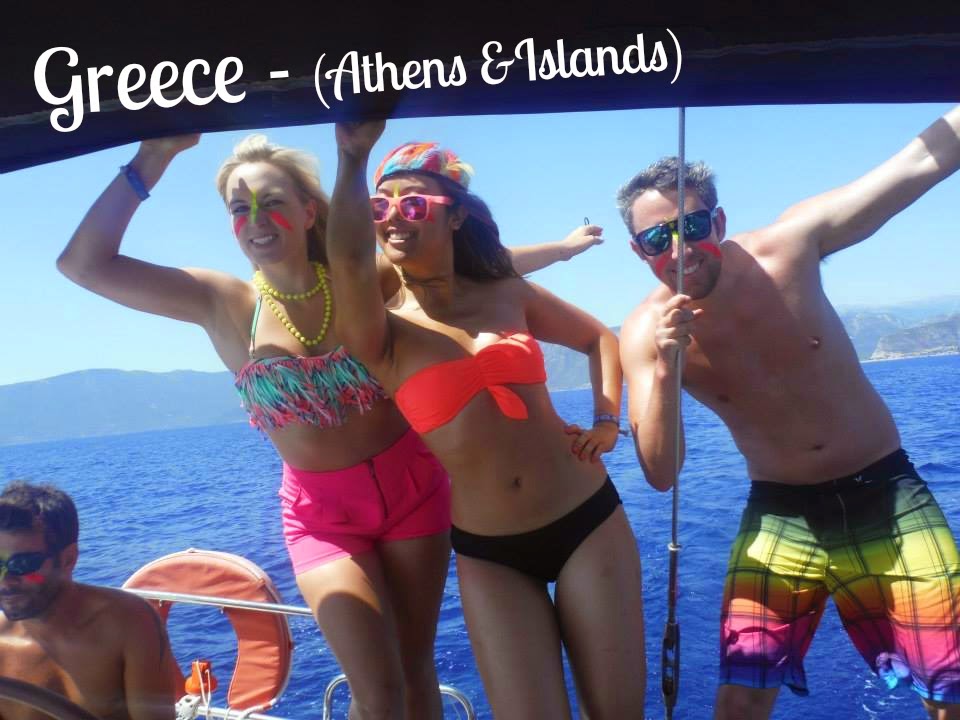 Have you guys heard of The Yacht Week?
The Yacht Week is the most amazing trip in which you and your friends
travel around on a yacht for a week (guided by a skipper). This past
summer my good friends Sarah, Natalia and I decided to do The Yacht Week
Greece. It. Was. Unreal.

We started our Greece adventure by
taking just under a week to explore the island of Mykonos and then
Athens by ourselves. I absoloutely adored Mykonos. To me, Mykonos was a
constant “holy shit how is this real, do I secretly live in a
painting?!” type of trip. The buildings and ocean views are everything
you would imagine – with prisitine white walls with blue shutters and
crystal blue ocean views. I definitely would recommend Mykonos.

Next
up, Athens. Sarah and I actually were SHOCKED at the state of Athens.
It is the MOST friendly city I have ever been (and having been to 29
countries, that is saying something!) but so much of the city is run
down. It was quite a stark contrast between the friendliness of the
city’s inhabitants and the grafitied, run down nature of most of the
city. That being said, getting to tour the Acropolis was once in a
lifetime event. Seeing buildings that ancient, being in the place where
modern democratic society as we know it was founded, was pretty damn
breath taking. Also, if you are ever in Athens you HAVE to check out the
Acropolis museum. SUCH a cool museum and the layout of the building
itself is really beautiful and unique. It may be one of the best museums
I’ve ever been in! 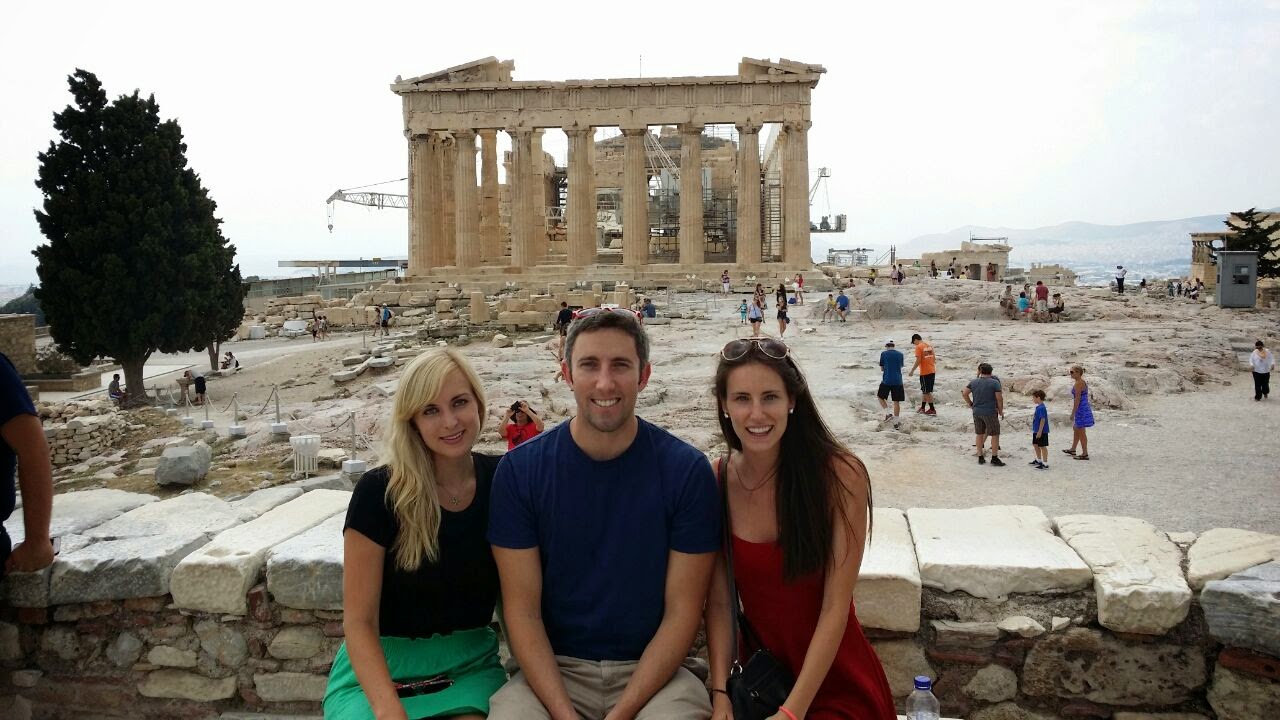 **At the Acropolis with the Parthenon in the background**

Outfit: Greece in the summer is HOT… and I mean H.O.T. So, I basically lived in cotton tee’s, skirts and Grecian sandals. This J Crew Factory skirt is my go-to for traveling in hot climates!

One of the COOLEST parts about Athens (Fashion wise) was going to “the poet sandalmaker of Athens”. This
man (and his son) have been making sandals (and beautiful poetry!) for
years. They handmake the sandals directly to your feet so they have the
perfect fit. They have made sandals for so many amazing people – from
Jackie Kennedy to John Lennon to Sophia Loren!!! I got two pair of
sandals there- they are so cool and comfy! Here are two pics from the
store: 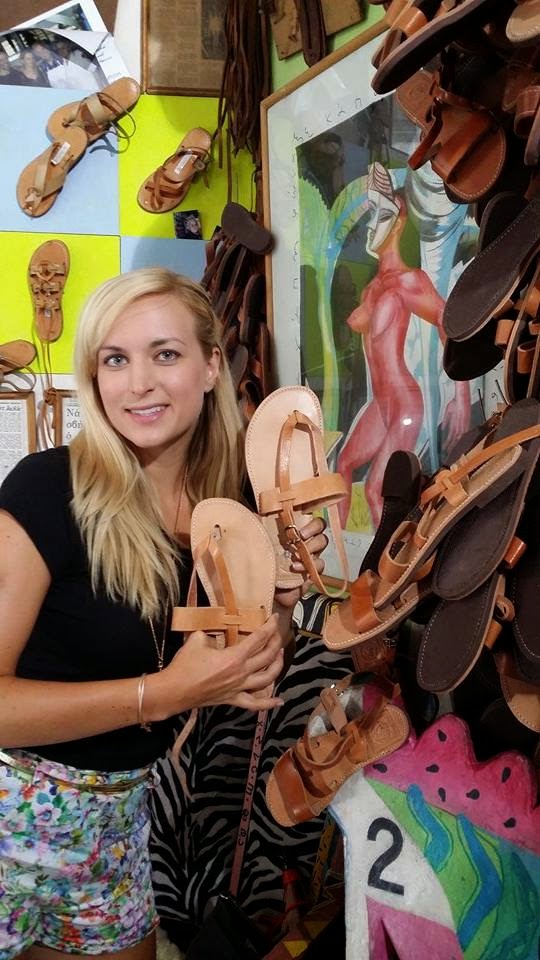 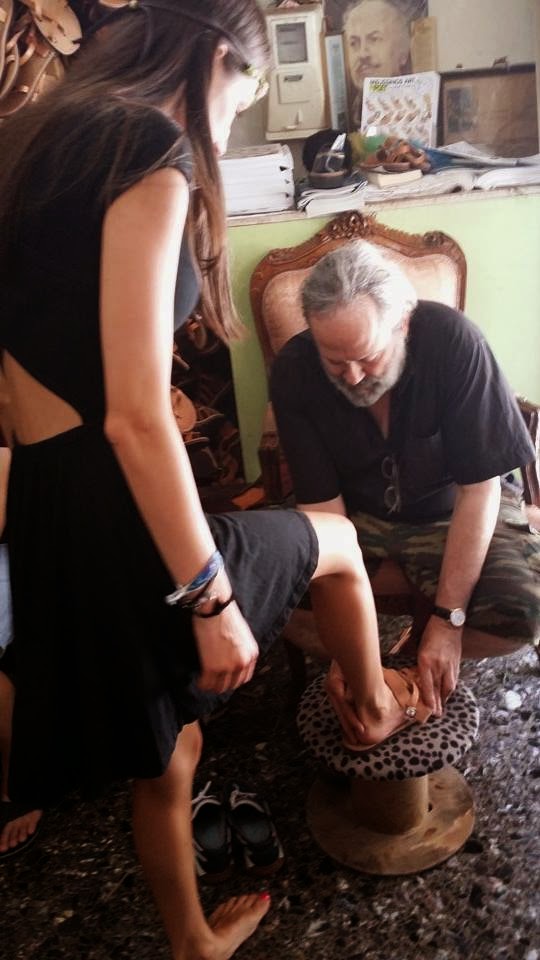 Okay,
back to Yacht Week. After our exploration of Mykonos and Athens we
started on our Yacht Week adventure. We left from Lavrio port in Athens,
and then spent a week travelling to various small islands off the
coast. Essentially we were island babes (and dudes) for an entire
week!!! Fashion wise this meant literally we wore nothing but bikinis
and coverups for an entire week! 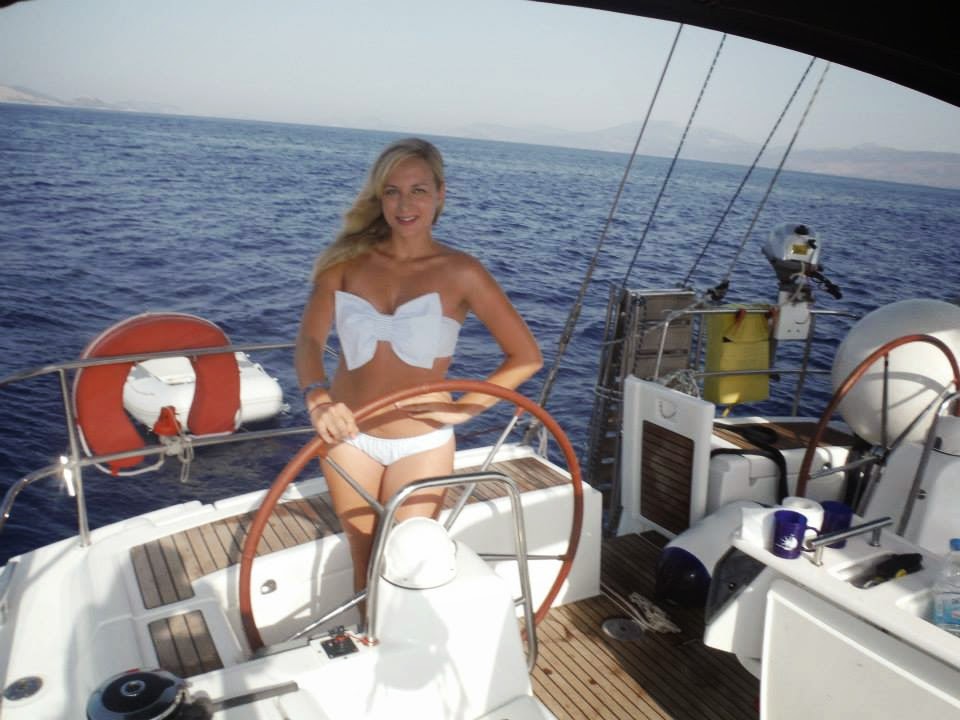 **Me Learning to Steer Our Yacht**
Outfit: I am OBSESSED with this Seersucker Bow Bikini. I ordered it off – Etsy 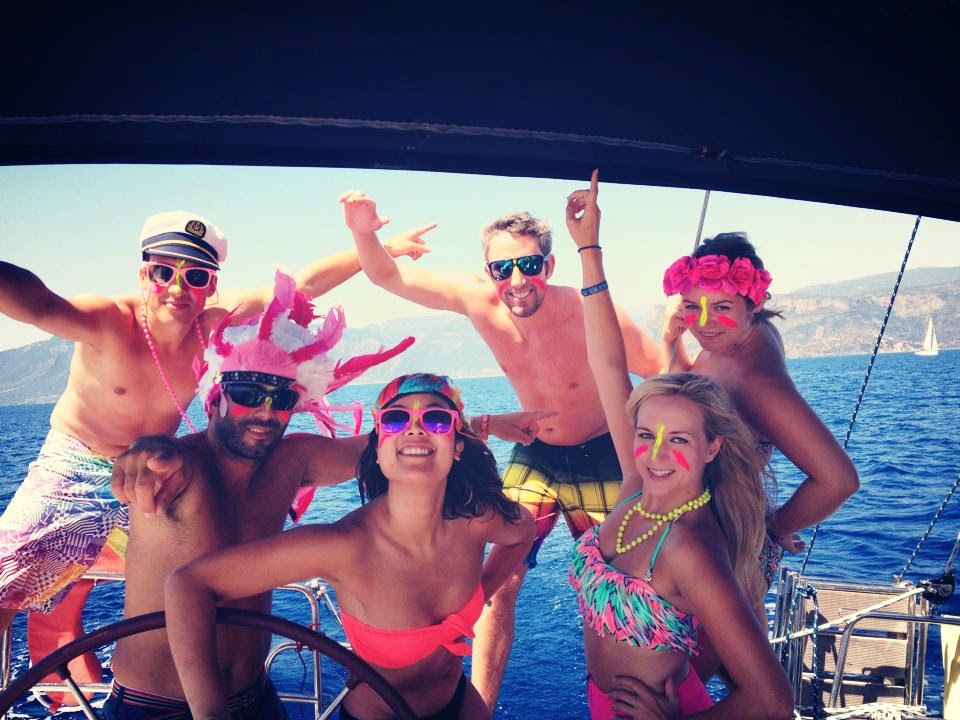 *For our “Yacht Party” outfit we Decided to Dress in Neon*

Outfit: Right before I left for Greece I snagged this neon fringe bikini from Forever 21 for under $20! Similar swimsuits here, here and here 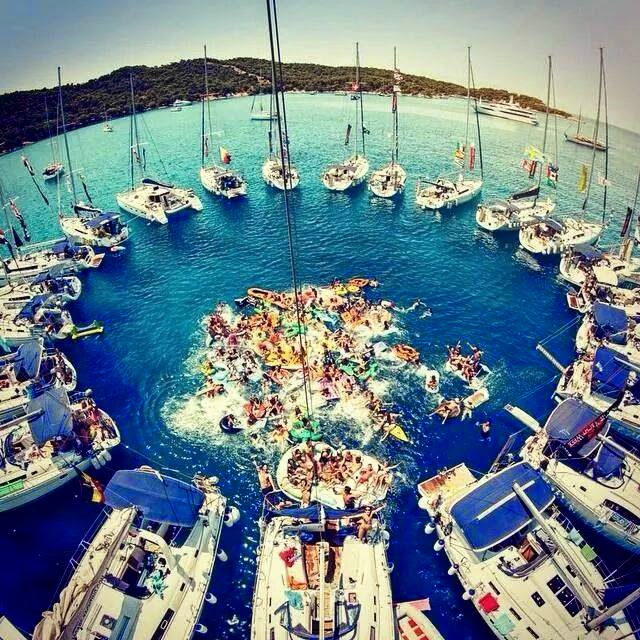 One day we had a “circle raft” party with all the other yachts… ie. we moored our yachts in a circle, then all jumped in our floaties and partied in the ocean all day. Photo Cred: Fabian Webster 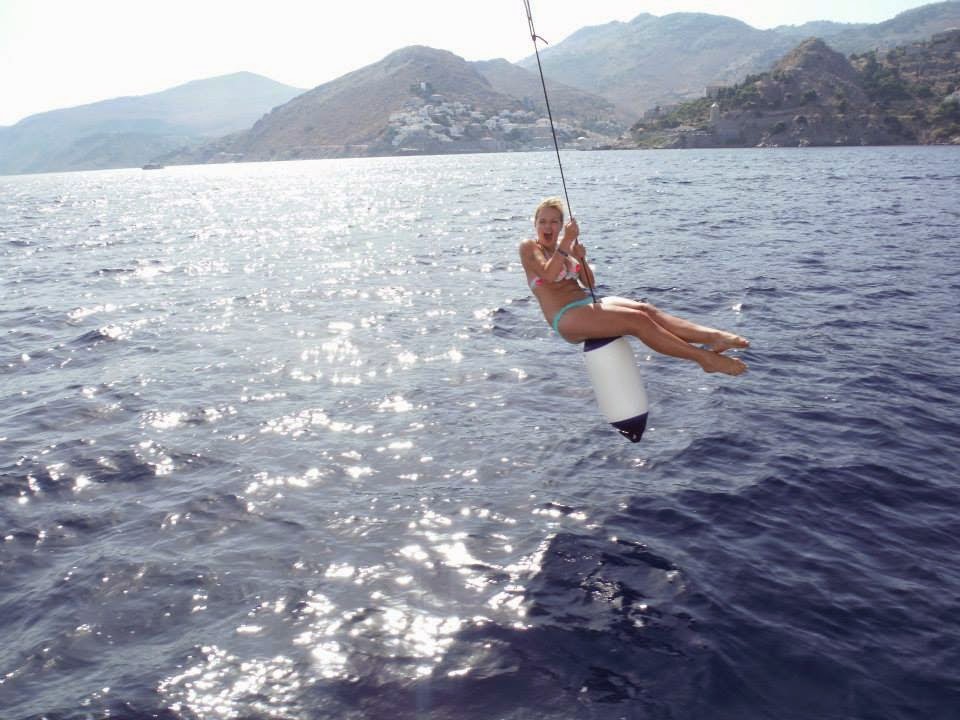 
This was a CRAZY activity called “Heli-Yachting”.  In Heli-Yachting you stand on the side of your yacht with the buoy between your legs. The captain starts gunning it and tells you to jump. Right when you jump he cranks the boat hard sideways and so you make a semi circle over the water while on this buoy. The trick is making sure you jump off and land in the ocean before you complete the semi-circle, otherwise you’d hit the side of the boat! 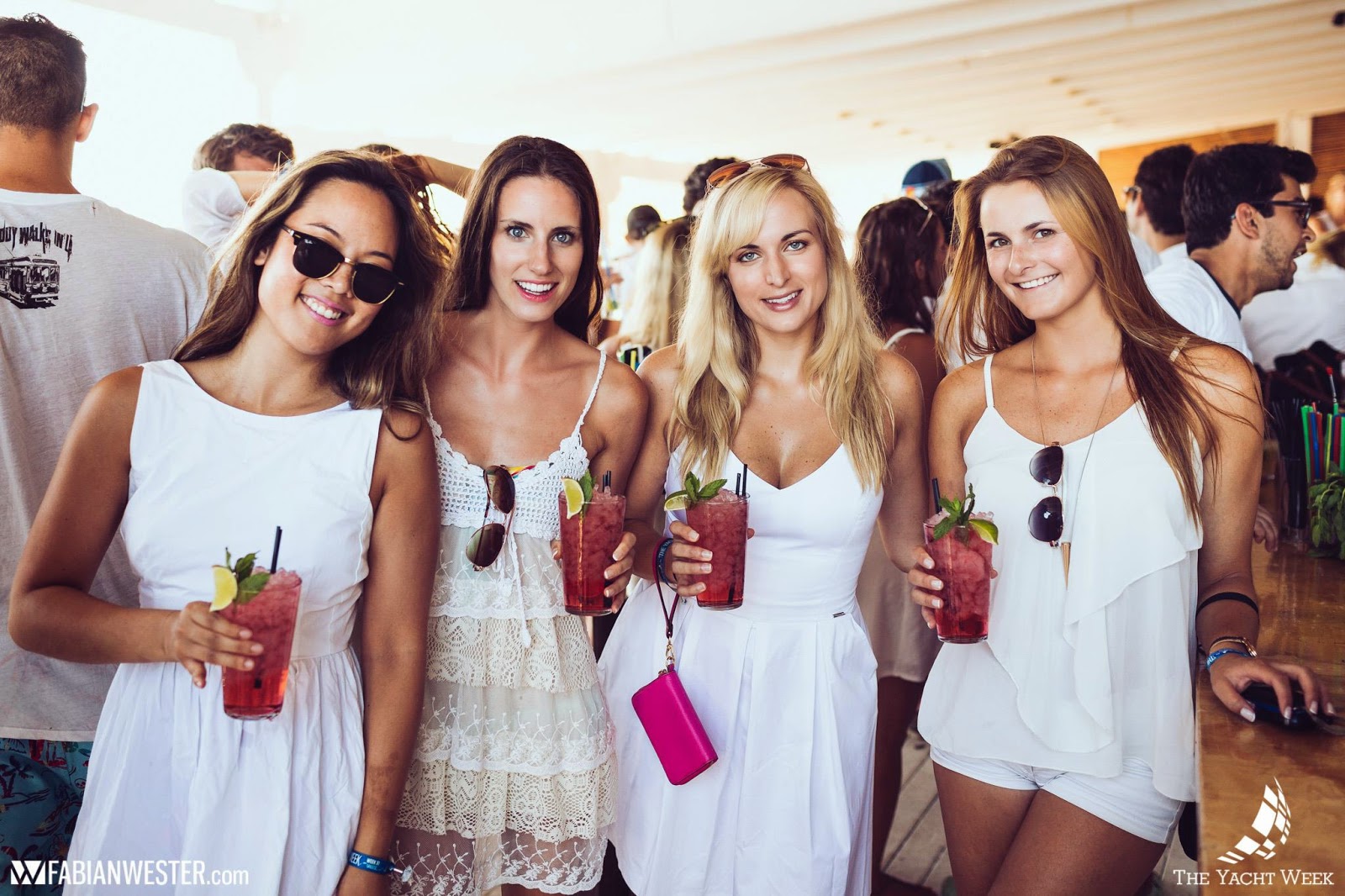 Probably my favourite party of The Yacht Week was the “All White Party”. We moored one afternoon on an island and had this party in a bar on a cliff overlooking the ocean. Sidenote: The drink in our hands is a raspberry mojito and it was BY FAR the best drink I have ever had. Yummmmm. 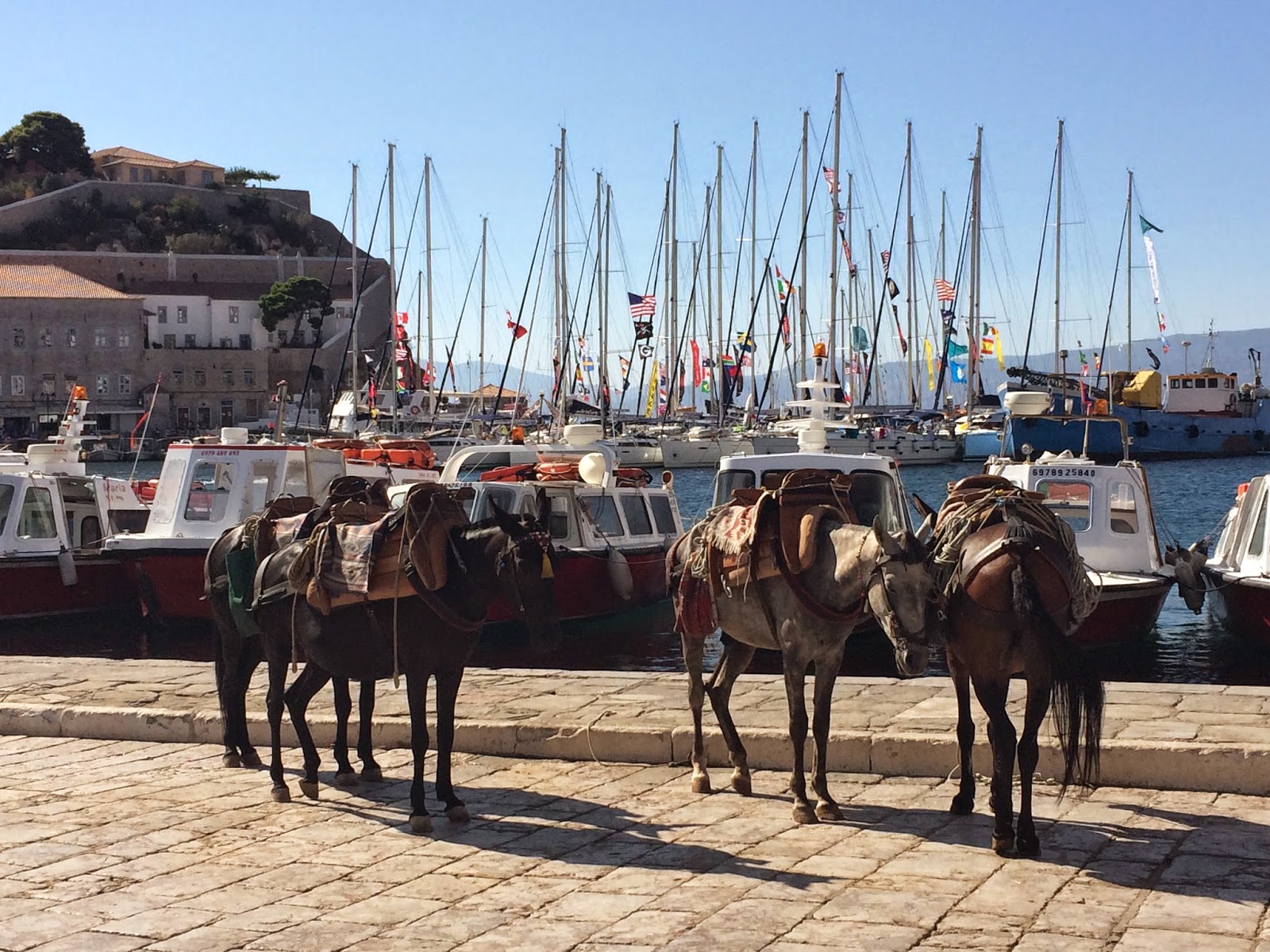 My favourite island that we visited was Hydra. The coolest thing about Hydra is that there are NO cars on the entire island. The mode of transport? Donkey. I kid you not I even saw an “ambulance” donkey who had a little sign indicating he was the medical transport. 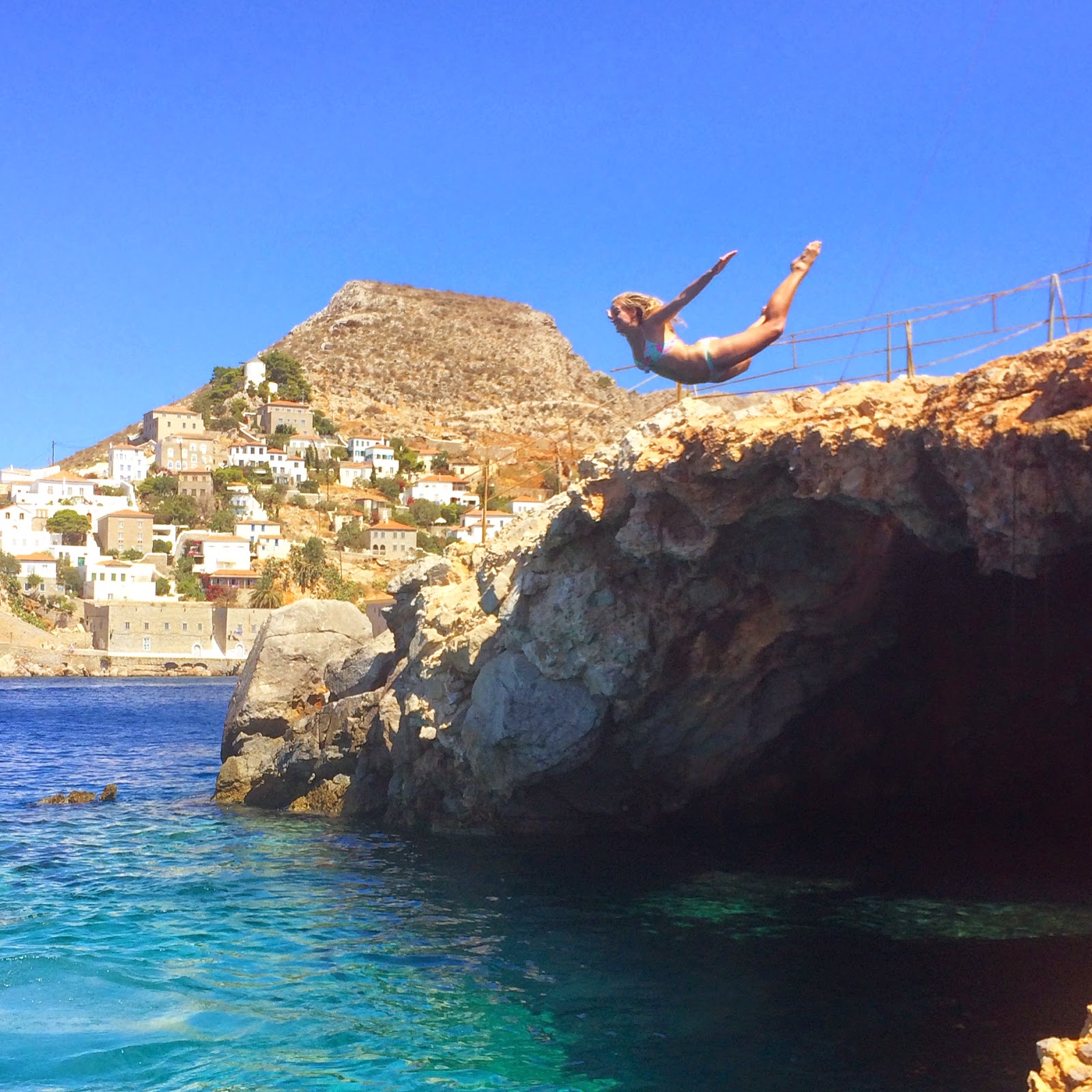 I am kind of bold when it comes to adventure travel (definitely something that has got me in trouble once or twice haha!) So, of course I had to try crazy jumps like the one in this picture when we went cliff jumping one afternoon!

Thanks for reading my Travel & Fashion post!! I’ll be periodically posting “Travel & Fashion” posts when I travel to new destinations. I would love to hear what you guys like and don’t like about these posts so I can make them the best they can be!!