Split & Hvar, Croatia: What to Skip & What to Do (Hvar Travel Guide) 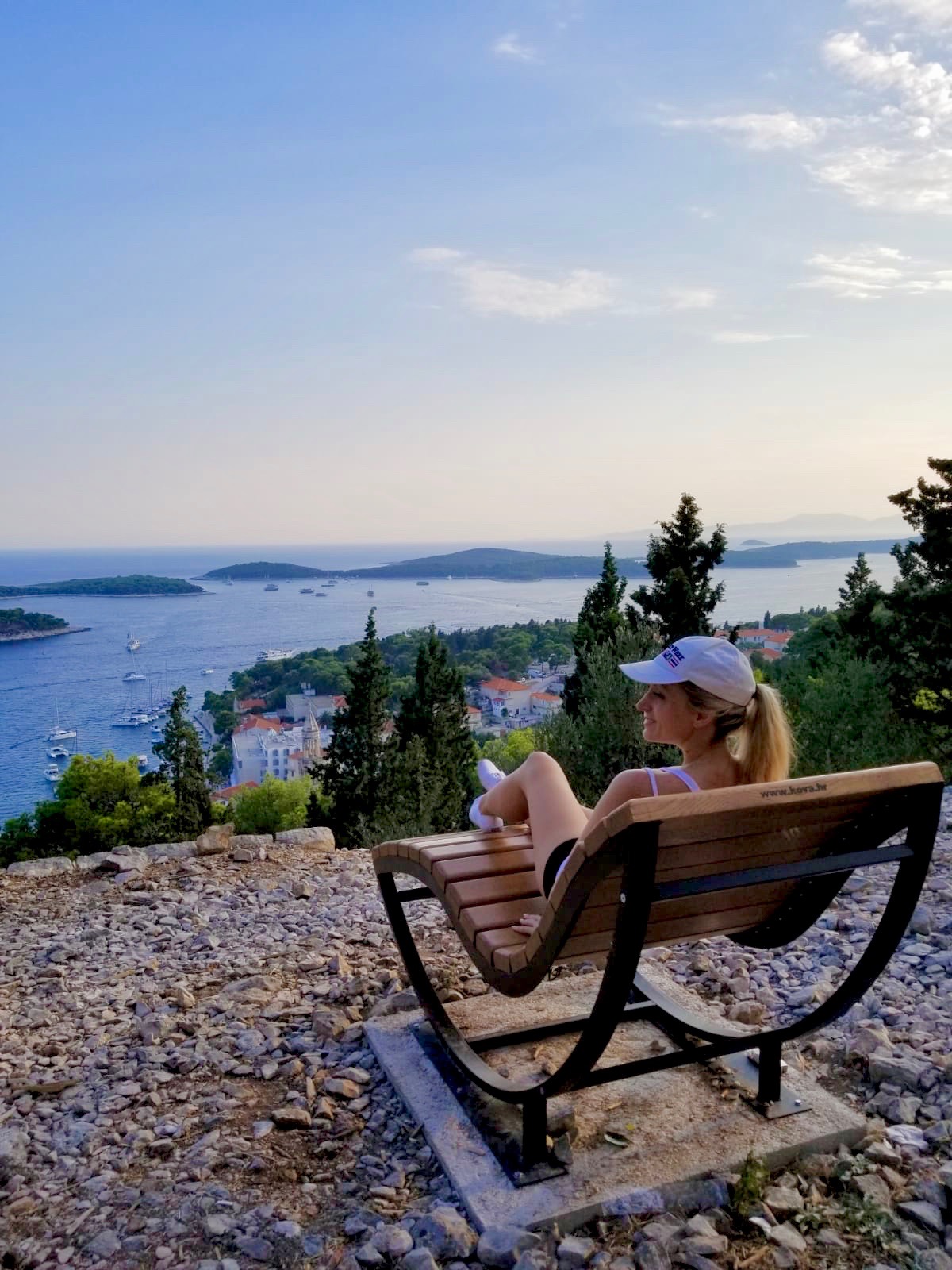 Split & Hvar, Croatia are two destinations that are quickly growing as must-visit cities for tourists traveling to Croatia. I was lucky enough to visit both after a few days in Zagreb (my Zagreb recap is here if you missed it!) Today I wanted to recap my trip for you but, more importantly in bringing you this Split & Hvar travel guide, I wanted to share what you can skip as well as what you should see. So let’s get to it! 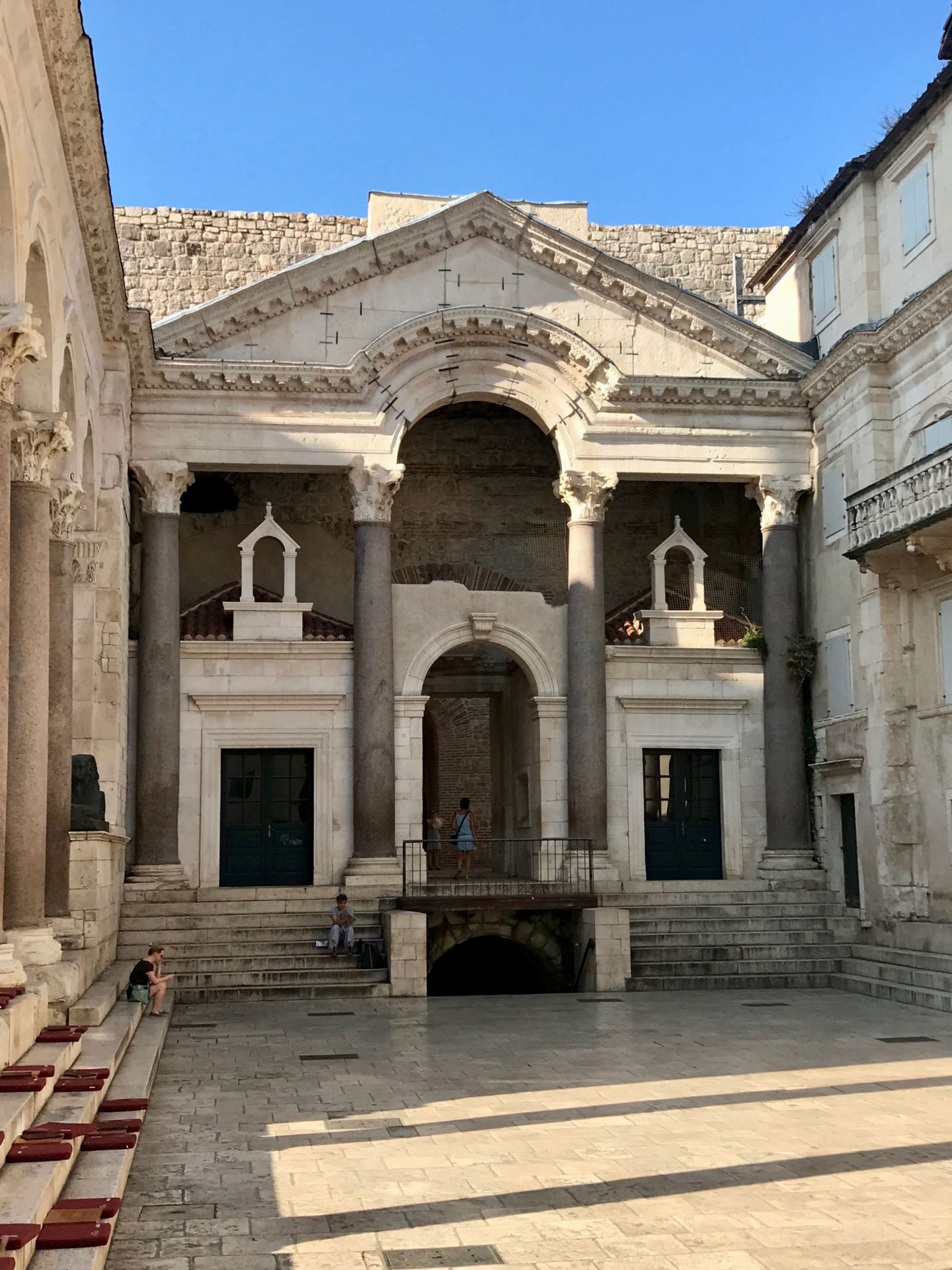 First up, Split. After flying into Zagreb many people make Split their next destination (perhaps with a day trip to Plitvice Lakes along the way). The main draw of Split is, as you can see, Diocletian’s Palace.

Diocletian Palace is one of the best preserved monuments of Roman architecture in the world. I knew that going into it, and still was not prepared for the size and beauty of it. It definitely gave me pause when we first walked up to it at night. 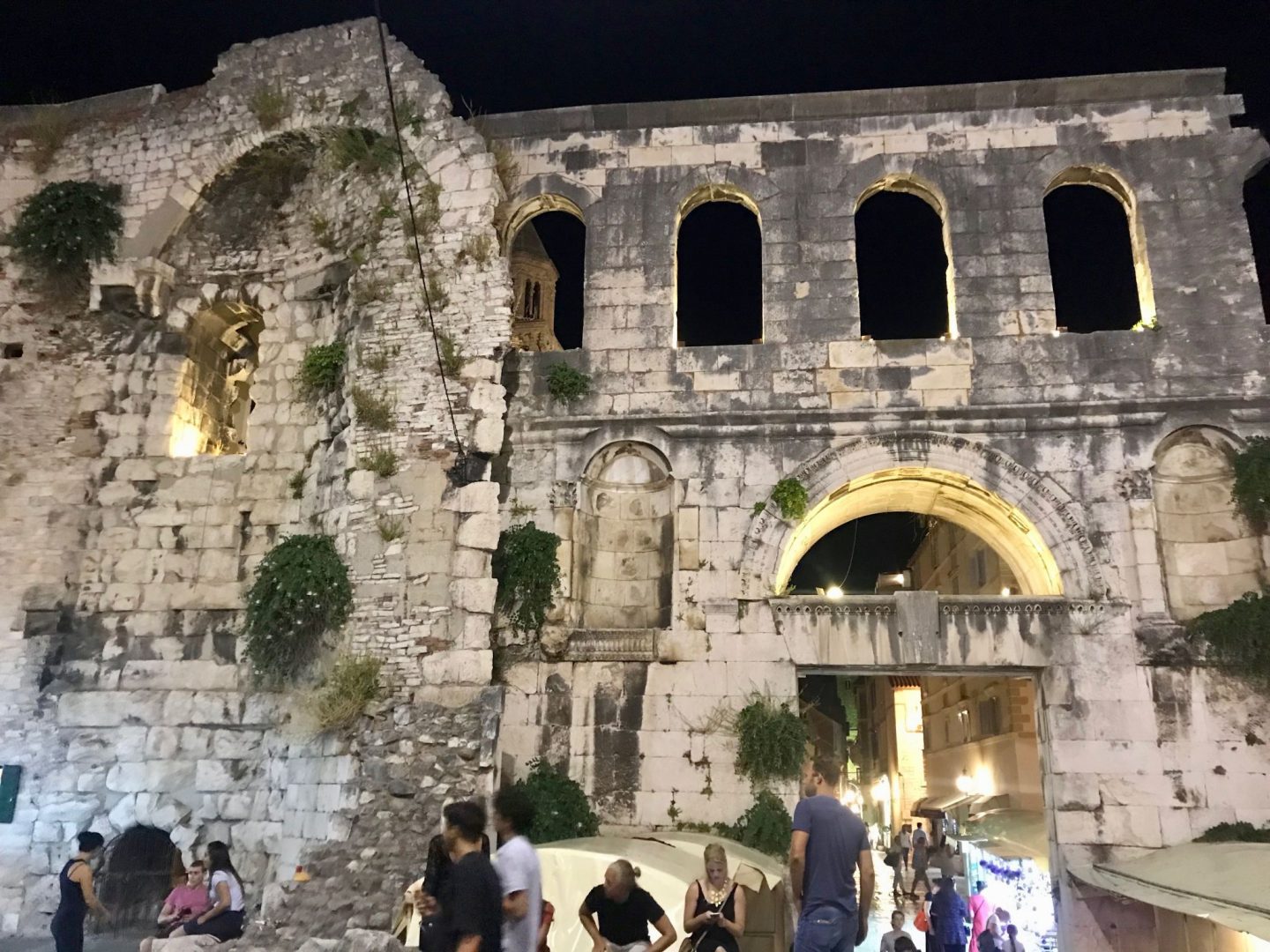 The palace was built in the 4th century and served as both a Summer home and Roman military camp. It is definitely worth seeing.

… That said, it is pretty much the only thing worth seeing in Split. Honest opinion? If you are tight on time in your Croatia trip Split can definitely be skipped in favor of Dubrovnik. If you do have time though, one day in Split is worth it in order to see the palace.

Also, if you’re a vegan or vegetarian I found  a cafe in Split called UpCafe which is absolutely worth going to. Being dairy and meat free in Croatia is a bit challenging, so finding a restaurant that caters to that diet is quite rare. UpCafe has milk alternatives (.. and as such my only latte in my three week trip!) and some vegan and gluten free options for food.

Alright, on to where I think you must see if you’re traveling in Croatia: Hvar! I titled this post a Hvar travel guide for a reason – Hvar is a beautiful city that you could absolutely spend a week in. 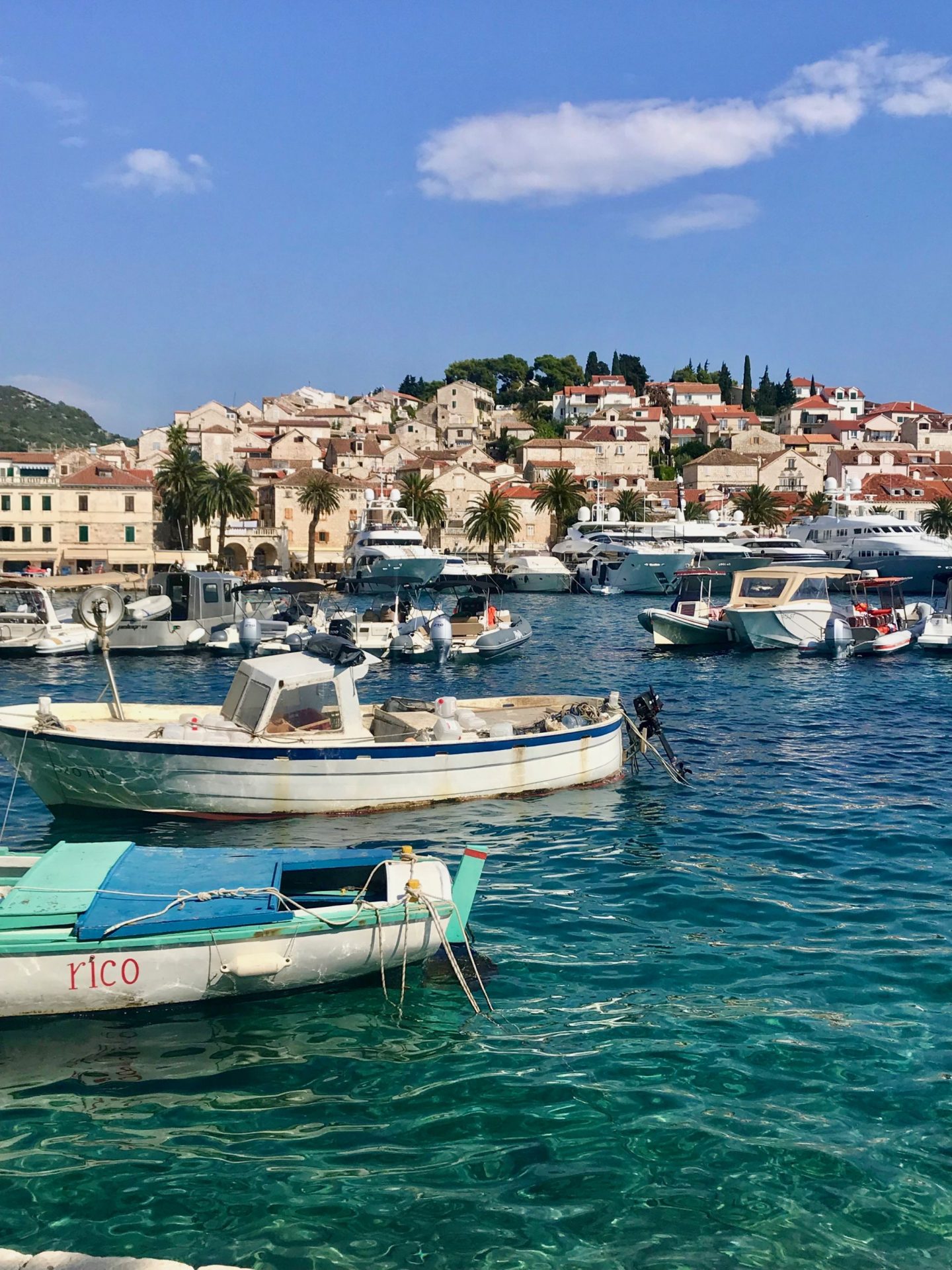 *Boats in the Port in Hvar*

Hvar has become a popular tourist destination in the past few years; with celebrities like Leo DiCaprio mooring their yachts there and bringing international attention to this port town. When it comes to giving you a Hvar travel guide; the main advice I can give is just to explore the city!

The main town itself is, as you would expect, a few rows of streets adjacent to the port. There are a ton of restaurants, some shops and some bars. Take some time to wander through and explore. My personal favorite restaurant was La Cucina; a pasta and pizzeria that had gluten free pasta! I had a spicy seafood pasta and it was delicious.

After exploring the main town, next up in my Hvar travel guide would be to hike up to the fortress. It’s an easy hike/walk (though it does take some time, especially if it’s hot) and the view you get of Hvar below is truly incredible.

*view of Hvar from just below the fortress* 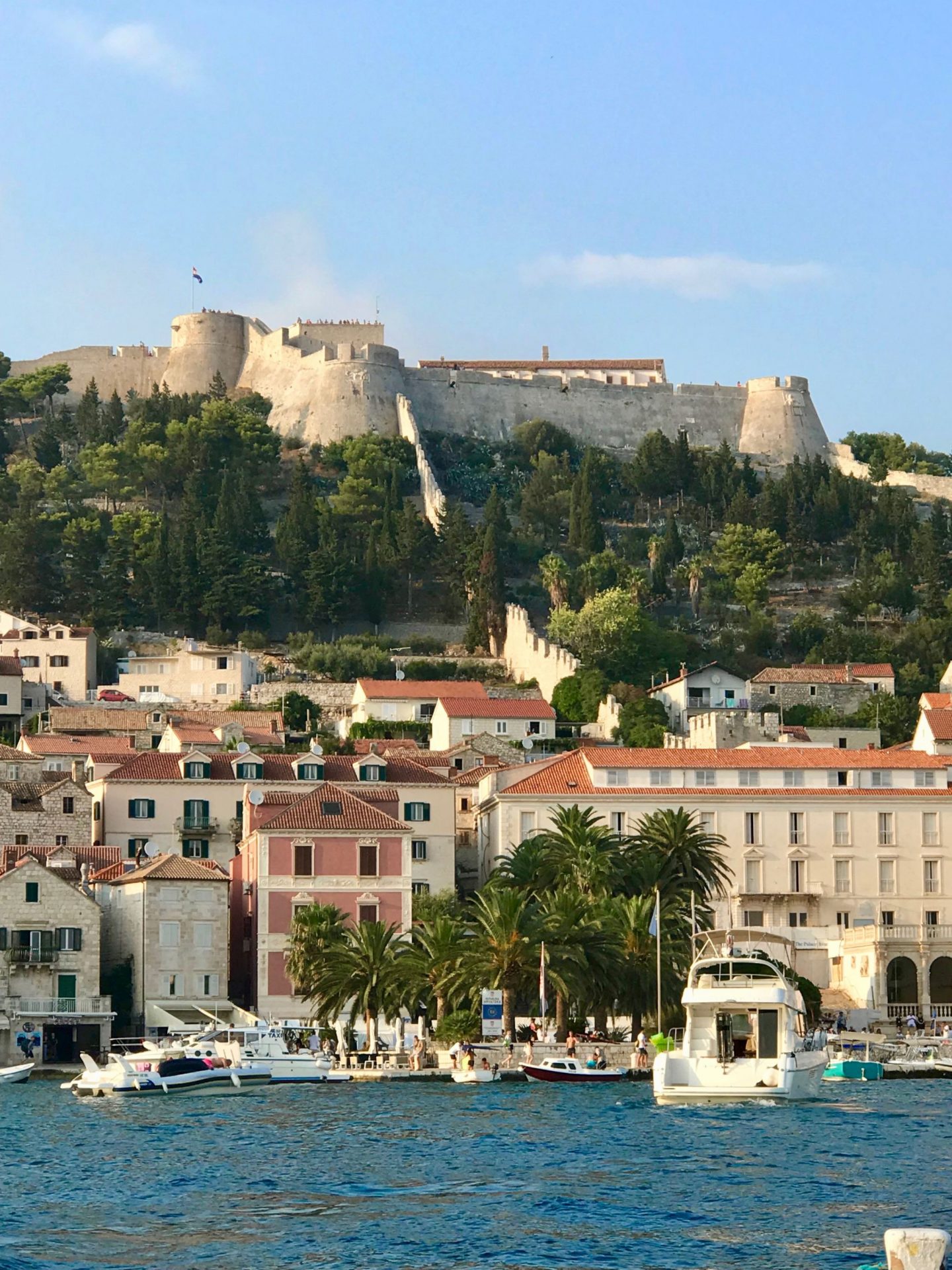 *view of the fortress from the main port*

One thing I really liked about Hvar is that it has a small town feel in that everyone goes to certain things at certain times. For example, if you are looking to party and have a few drinks everyone knows that the place to be is Hula Hula at sunset. from around 6pm until it gets dark, Hula Hula is a beach bar that becomes the place to be.

After that, in true European style, many people go for a late dinner and a nap before going out to one of the Hvar nightclubs. Any Hvar travel guide would be remiss if it didn’t talk about the nightclub scene as it is definitely a part of any Hvar experience. There are a number of late night clubs, but my personal recommendation would be for Carpe Diem. Carpe Diem opens at 11pm (or midnight?) and is open until 2am; at which time water taxi’s take you from the Carpe Diem Club on the main land over to the Carpe Diem beach club on an island off the coast. That runs from 2am-5am.

Speaking of islands; one of the reasons I most loved Hvar is that there are a ton of islands you can do day trips to that are so worth seeing. Sarah and I went and spent a day on Pakleni island, and I cannot recommend it enough! It’s a great way to get away for the day to swim and relax in the sun (but like everywhere in Hvar, it is a pebble beach and you do need to pay to rent beach chairs or day beds – you’ve been warned!) It also happens to be an instagrammer’s paradise with a beautiful (and random) giant gold frame to take pictures in and a swing over looking the water. 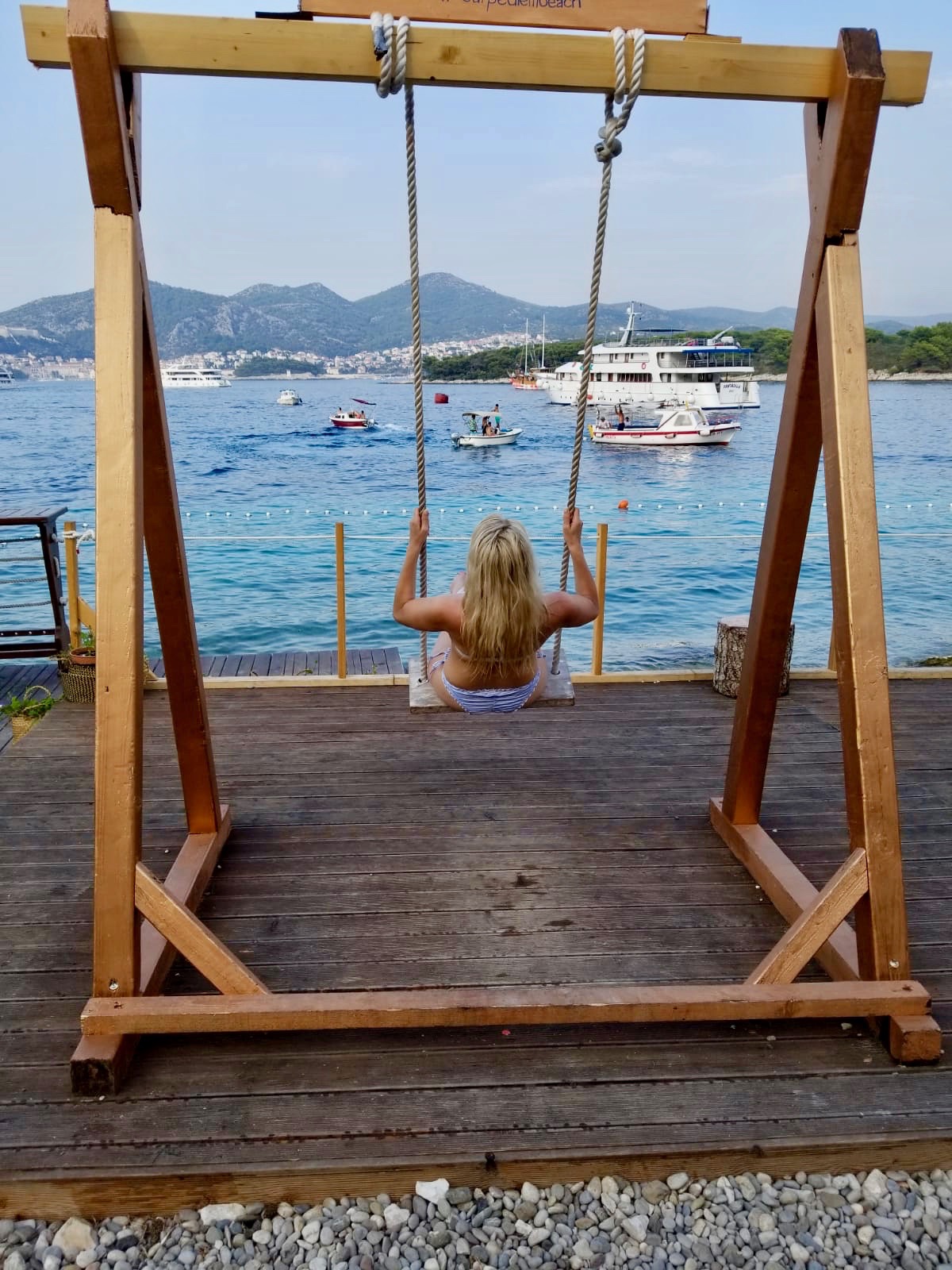 Last thing I wanted to talk about in this Hvar travel guide is where to stay! Sarah and I stayed at 2 places while we were there and both were amazing.

First up – Violeta Hvar. This is an apartment complex (you can find it on booking.com or hotels.com) that is run by a wonderful woman and her mother in law. The location is a bit of walk – it’s probably 15 minutes’ish uphill from the Port/main city, but being outside of the town and having the views and privacy of this place is so worth it. 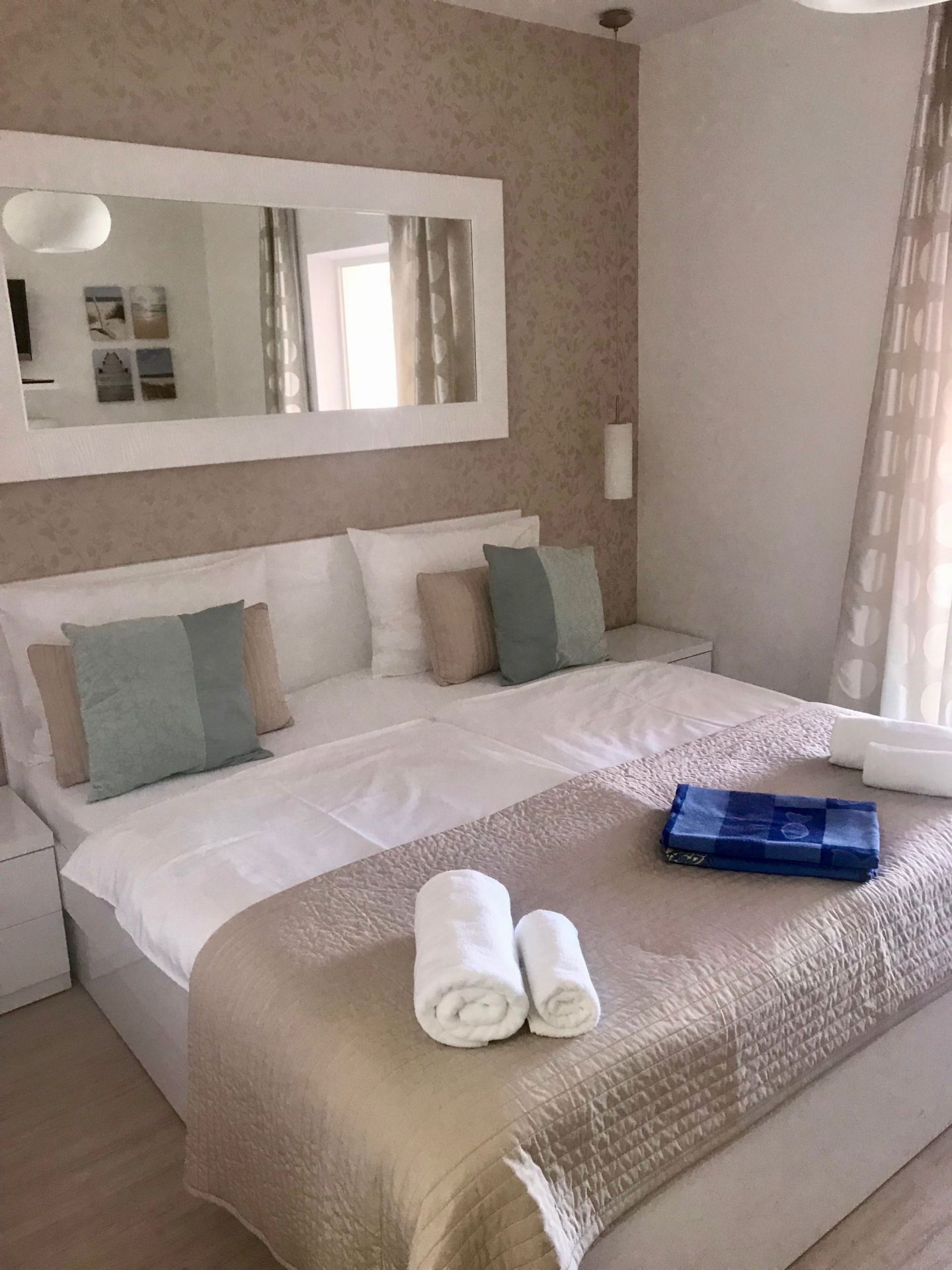 *bedroom in our Violeta Hvar apartment* 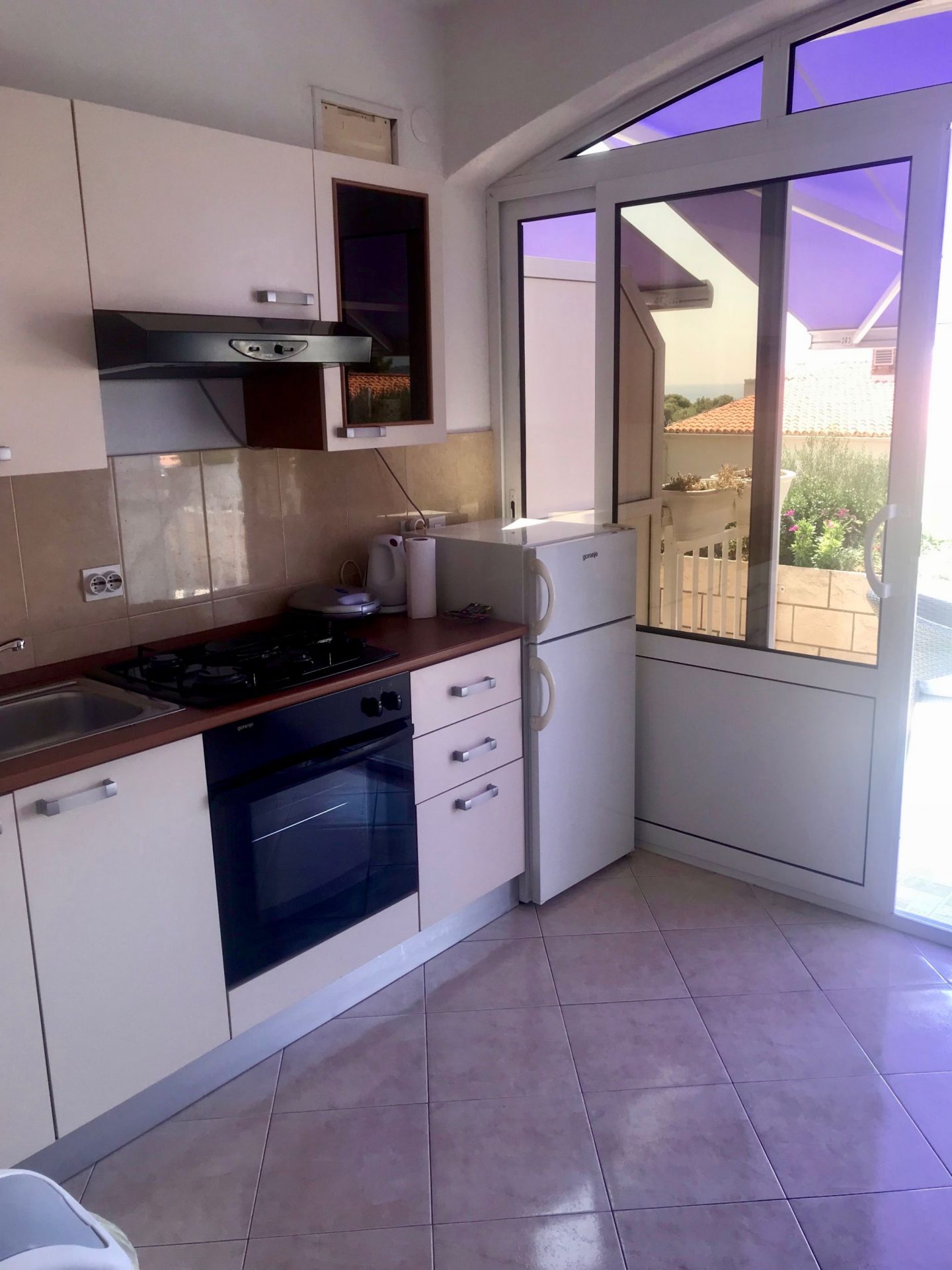 *kitchen in our Violeta Hvar apartment*

Violeta Hvar is also amazing because of the space! No joke, our room at Violeta was bigger than my Vancouver apartment haha. After being in hotels for a while it is definitely nice to take a break and have a place where you can actually buy some groceries and make your own meals.

The customer service at Violeta is hands down the best we had in all of Croatia. The owner came and brought us welcome cake and orange juice on our arrival, they gave us a million recommendations and help with organizing activities, and they literally saved me from having no underwear or bathing suits for the rest of my trip.

… Yep lol. Long story short, I realized when in Dubrovnik that I somehow managed to leave a drawer full of all of underwear and bathing suits. I was panicking trying to figure out what I was going to do and they were so helpful and – get this – went into the main town of Hvar with my clothing in a bag, placed in on a ferry going from Hvar to Dubrovnik and then texted me the ferry arrival time in Dubrovnik so I could go meet it and get my stuff. Talk about going above and beyond! It was hilarious/awkward asking a random deckhand on the ferry in Dubrovnik if he happened to have a grocery bag full of underwear for me lol, but he totally had it and very kindly carried it off the ferry and handed it to me. *most embarrassing moment of my trip*

Next up – The Amfora Grand Beach Resort. 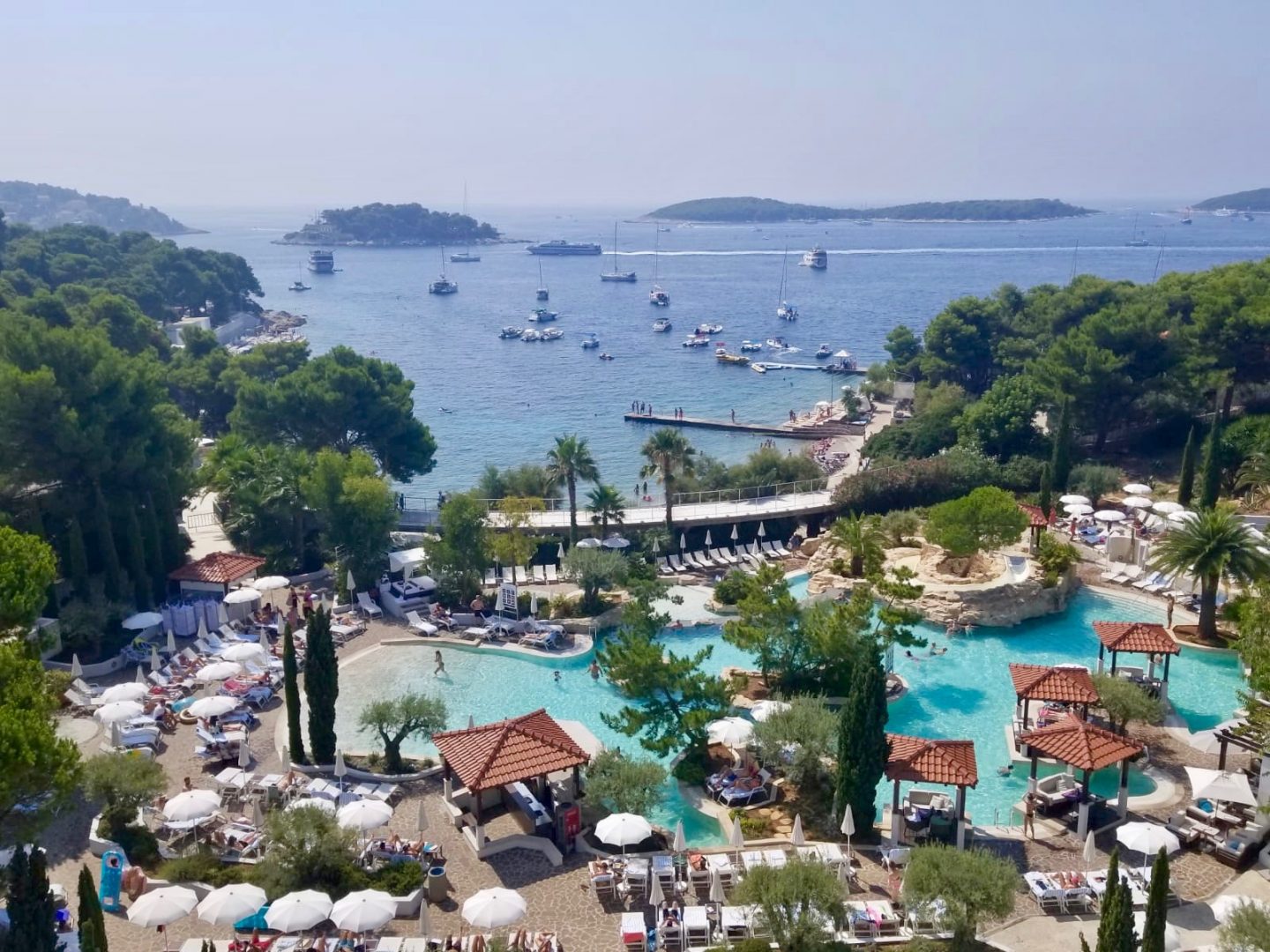 *view from the hotel overlooking the pool*

The Amfora is considered the place to go in Hvar. It is the main beach resort and it is always busy. Sarah and I decided to splurge on one night there basically because we really wanted to spend an afternoon just relaxing by the pool. It was so worth it. The hotel rooms themselves are nothing special; but the resort itself is great. They have yoga classes, a lovely restaurant and an epic hotel pool complete with a water slide. 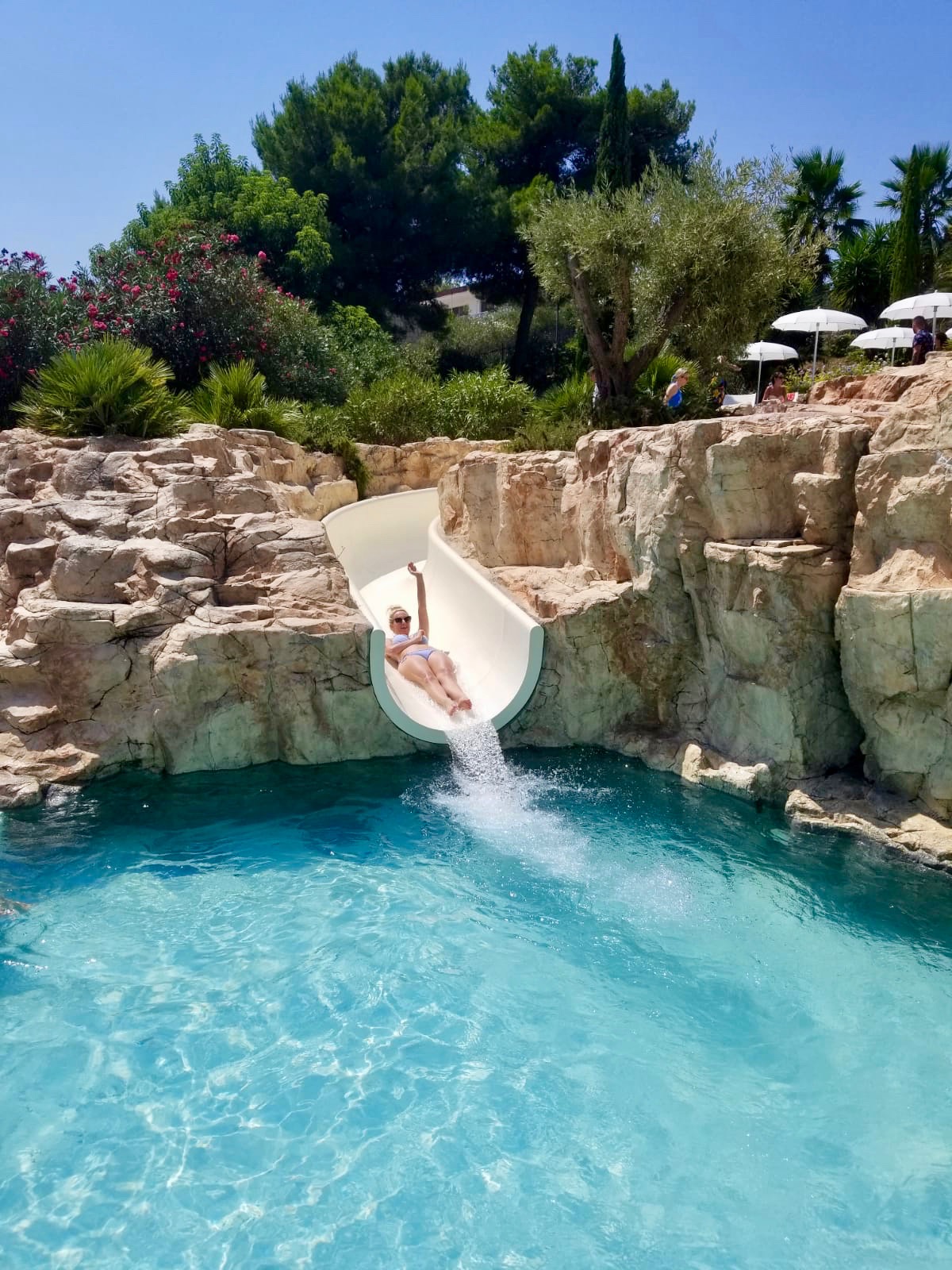 Overall, I loved Hvar and would definitely go back. I hope you enjoyed this little Hvar travel guide; and if you have any questions just let me know in the comments! Stay tuned for one last city recap of my Croatia trip at the end of this week!

linking up with: creative mondays // #howisummer // mix it mondays

Everything You Need to Know About Aruba’s…