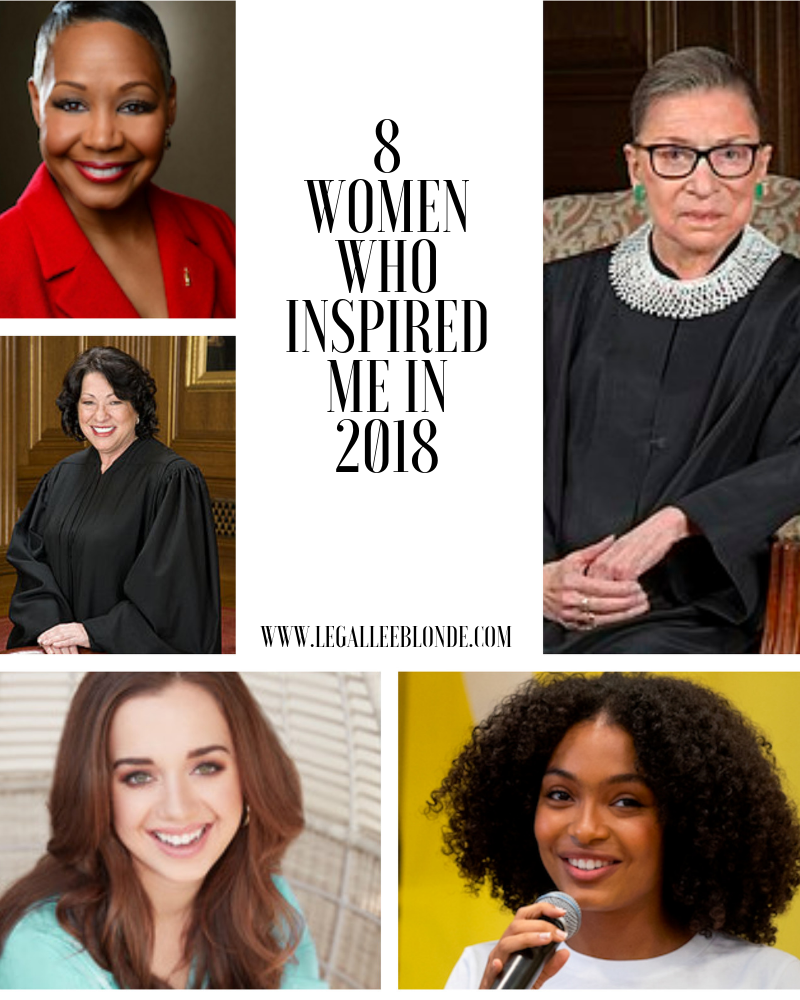 Before I get started I have to say that there are a ton of women who I could have put on this list. From celebrities doing good (*cough* Kristen Bell *cough*), to local women working on community projects, to my own friends conquering their goals. There are so many women who inspire me on the regular. The 8 women below are women who I have read about throughout the year who I’ve felt inspired by that I think you may all be inspired by as well. There are a few you’ve definitely heard of (all hail R.B.G., am I rite?) but I think there will be some you haven’t heard of yet. Pour yourself a cup of coffee, curl up, and get ready to feel inspired!

Jacinda Arden is currently serving as the Prime Minister of New Zealand. She is the world’s youngest head of government, having taken office in 2017 at the age of 37. I personally agree with a fair bit of her politics, but that is not what inspires me. What inspires me is that she is changing the face of what it means to be a world leader; not only by being a female- and a young one at that – but by living a life on her terms while running a country. She had a baby girl in June of 2018, while in elected office and took a brief maternity leave. Her actions were shocking to many, but she demonstrated that she was going to live her life and run her career on her terms. Inspiring to say the least.

Anastasia Higginbotham is a New York based children’s author & illustrator. She came into the spotlight in 2015 with the publication of her book “Divorce is the Worst”. On the heels of this success she created the  “Ordinary Terrible Things” Children’s book series. In these books she deals with issues that today’s kids are going through and she does it in a way that is age appropriate with nods to social justice and inclusion. I learned of her books this year though some colleagues who picked one up for their daughter during their divorce. It’s so inspiring to see someone creating genuine, helpful content for little kids dealing with big issues.

Lisa Borders is the President & CEO of Time’s Up; the organization founded to support the #TimesUp movement fighting against workplace sexual harassment, assault, and abuse, in Hollywood and beyond. Ms. Borders has worked in high level organizations for years (she is a former President of the WNBA) and on November 1st 2018, she became the first President of the Time’s Up organization, giving this movement it’s first leader. It will be incredible to see what she can do in this role bringing change to the toxic culture in Hollywood and encouraging change in how women are treated in the workplace everywhere.

As a lawyer, my love for RBG runs deep. You may remember my Ruth Bader Ginsburg halloween costume. You likely know her, but in case you don’t RBG is an Associate Justice on the Supreme Court of the United States. I’ve admired her for years, but in 2018 I was especially inspired by her, from some of her decisions from the bench (I will skip my fawning over legal precedent and jurisprudence), to her work ethic, she is a true inspiration. When she broke a rib this past fall she gave everyone quite the scare (though the hilarious tweets with everything from people offering up their ribs, were incredible). It was amazing to see her come back and her commitment to her profession.

That said, while sitting in admiration of her commitment, I came across another line of thought – women calling out society for praising her for never missing a day of sitting court and for coming back immediately after breaking her rib. There was a sentiment that we need to stop glorifying working ourselves to death, and realizing that we need to promote, encourage and prioritize self-care. This really hit home for me, and is something that I think we need to talk about more. We can love and admire RBG, but let’s keep her work and her work ethic in perspective and allow her time and space to heal, as we should allow ourselves.

Launched in to the spotlight in June 2018 when she won the Democratic Party’s primary election in New York’s 14th congressional district, at only twenty nine years of age, Alexandria Ocasio-Cortez is the now youngest women in history to serve in US Congress. woah. In addition to the very obvious inspiration from that alone, similar to Jacinda Arden, it is not just what she is doing that is inspirational to me, but how she is doing it. Alexandria Ocasio-Cortez is not playing the game of kowtowing to the old white men in US politics. She is unabashedly bringing her own brand of millennial feminism to Congress and I am here for it. As a white woman, I have a lot to learn about the experience of women of color and how I can be an ally in the fight for equality for all women.

Alexandria Ocasio-Cortez is making waves that I didn’t even know needed to be made and I am so inspired by it. For example, to her inauguration she wore a white suit (an homage to the suffragettes) and a pair of big gold hoops, demonstrating that these hoop earrings that many WOC have been told are unprofessional, can absolutely be worn in a professional setting. If you want to read more about the impact of these seemingly small act, I urge you to read this article and see the tweets that WOC are sharing about what this decision means to them.

You may not know this name yet; but you will. Yara Shahidi is a young American-Irian actress and, now, activist. She turned 18 in 2018 and she founded an organization called “Eighteen x 18”. This organization works to get young people registered to vote, as well as to remove barriers people face in voting and raise awareness of politics. For someone so young to be undertaking such a big project, she easily made my list of women who inspired me in 2018.

Karissa Bodnar is the founder of cosmetics company Thrive Causemetics. Karissa is a 29 year old makeup artist from a small town in Washington (Pacific North West Pride what, whaaaat 🙌). From what I understand, she lost a dear friend who was a philanthropist to cancer at just 24 years old. It was after that that loss that she created Thrive Causemetics to provide quality makeup that gives back. All of their makeup is 100% vegan and cruelty free. For every Thrive product purchased, they donate to organizations to help women thrive. You can read more about their organizations and how exactly they give back on their website.

What inspires me about Karissa is that she has taken her specific talents and skill set (makeup artistry) and built a company for social good around that talent. Not everyone can be a philanthropist or social activist as their only profession, but I do believe that everyone can use whatever their talent or skill is to give back or do good in the world; and Karissa is perfect example of that. One thing that also really inspired about her is this quote I read of hers about dealing with these men in the corporate world talking down to her and making her feel inferior because of her age. She said; “Even if I feel scared in that moment to stand up for myself, I stand up for other women … I make it about the other women,”. Woah. That really resonated with me. I have been in many a situation with senior male lawyers where I have felt too shy to speak up. As someone who so passionately advocates for other women though, I think following that line of thought will make me more brave and more able to speak up when I need to.

I know, I know, another SCOTUS judge. I couldn’t help it! My inner law nerd is showing. Anyway, I think Sonia Sotomayor is an absolute inspiration. In all of the hype around RBG I think Ms. Sotomayor can get overlooked. I feel inspired by the fact that that doesn’t seem to bother her. She is just there working her butt off on the Supreme Court. Plus, let’s not forget that she went on Sesame Street to do an episode explaining law to kids, which is basically the cutest coolest thing for a judge to do.

So there you have it! 8 women who inspired me in 2018. I hope you feel inspired and encouraged and ready to take on your day, and your year.

I would love to hear about any women who inspired you this past year.

Real Talk: Why I Will Always Tell…

Real Talk: Why You Should Go To…