My Career Path: How I Became a Criminal Lawyer 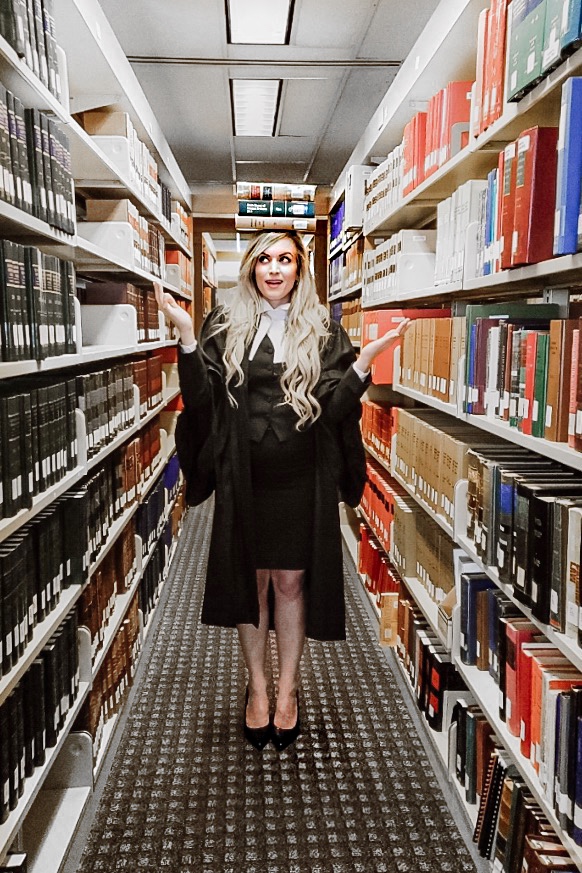 Probably the number one question I get asked in life is how I became a criminal lawyer. I certainly did not start out wanting to be a criminal lawyer … if you haven’t seen my ‘about me‘ page yet, it gives a pretty succinct run down of my original career goal haha.

I had no idea I would fall in love with criminal law, but here we are. I can’t imagine myself doing any other job (other than blogging full time) and I certainly wouldn’t be interested in any other area of law. Criminal law is a unique, sometimes dark & twisty, field that I find engaging, rewarding, and complex.

So with that, I am finally sitting down to share my career path; how I became a criminal lawyer.

As a child I wanted to be an actress. I spent my childhood quite dedicated to it; taking every acting, singing, and musical theatre class I could find. By grade one I had an agent and, thanks to my unbelievably supportive parents, was able to go to auditions for commercials and tv shows quite regularly.

While I never booked anything huge, I was able to get to know the industry and throughout high school still wanted to be an actress. That said, I also always knew I would be getting a university education. Academics were very important to my parents (who are a judge and a veterinarian) and luckily school came easily for me. Academics “were my thing”; so to speak.

I decided to attend the University of British Columbia for my undergraduate degree, with a focus on theatre acting & political science. I chose UBC for two reasons. First, because I knew I wanted to be in a city where I could still get work in the film industry (which in Canada means your options are Toronto, Montreal & Vancouver) and second, because southern BC is the warmest climate / the only place in Canada that has palm trees; and I was determined to get as far away from snow and cold as I could!

I ended up getting a Bachelor of Arts in Political Science with a minor in International Relations. During my 4 years of undergrad I began acting less and less. In my 3rd year, way back in 2007, I had a small role on a tv show (I literally had only 5 lines) and that was the last show I ever worked on. The reasons why I left acting could probably make up an entire blog post of it’s own, but the main thing would be:

I love being in front of a camera, but I am mediocre (at best) and I realized that I wouldn’t actually be happy with the kind of roles I would be able to get as an actress. I don’t want this to come off as “I gave up my dream!” or that I am in any way advising anyone else to do that; rather, I realized that another path would be better for my happiness. Auditioning sucks. If you truly love acting and that is all you want to do will put up with it because of that. But for me, I realized that I did love other things and that while this was my dream, I had others which I could pursue.

The main other thing I loved, which I learned during my poli sci degree, was the world of non-profits and the ability to help people. I focused my poli sci / IR degree on non-profits and charities and so when I graduated I knew that was the field I wanted to work in.

The summer after graduating UBC, I got an internship at Invisible Children. Post-“Kony 2012” Invisible Children is now rather infamous, but way back in 2008 it was a just a small San Diego based non-profit working to stop the use of child soldiers. In May of 2008 I packed my bags and moved to California for this dream position.

My time at IC was invaluable for so many reasons that I won’t go into now. It came to an end however as I simply had a 4 month internship position. In the fall of 2008 I went back to school.

I did a 1 year Master’s Degree in International Development at the University of Toronto. My goal in getting my Master’s Degree was to better position myself to get a job in the non-profit sector; with my sights set on organizations like Free the Children, Unicef, Invisible Children, etc.

Unsurprising to probably everyone, graduating with a Master’s Degree and trying to find work in the the non-profit sector in the midst of the worst economic climate since the Great Depression, sucked. lol.  I spent a year applying for different jobs, but not seeing a whole lot of results. It was a difficult year working crappy temp jobs and feeling very uncertain about what my future career would look like.

During this period my mom suggested I go to law school. I was adamant that there was no way in h*ll I was going to become a lawyer. I insisted that I only wanted to do work that helped people; specifically, helped kids.

With that I decided there was no harm in at least applying to law school. I wrote the LSAT twice. The first time my score was okay, but not great (a 160) in part because I had been in a car accident a couple of days prior (broken arm) and was pretty much high as a kite on T3’s while writing it. I decided that while a 160 was okay I wanted to do better so I took one of those LSAT prep courses (Kaplan) and took the LSAT again.

The second time, I scored in the 99.9 percentile. I was accepted into all 7 law schools I applied for. After much back and forth, I decided on Osgoode Law School in Toronto because it is known in the legal world (or was then!? I don’t know if it still is… now I feel old lol) as the “social justice law school”.

My first week at Osgoode I sat down in my very first criminal law class and, honestly, that was it. I was hooked. I remember leaving the class and calling my best friend to say “HOW DID NO ONE TELL ME THIS WAS A JOB, THIS S*IT IS THE COOLEST EVER, OMG OMG OMG” 🤣

From then on I was exclusively criminal law focused. In my final year I participated in a clinical program that Osgoode offers, the criminal intensive, and was able to learn from practitioners and spend a semester job shadowing with the Crown Attorneys (… our version of DA’s, for any of my American readers).

I started out as a Crown Attorney, but became a defense lawyer just under 4 years ago. I now run my own practice.

And that, my friends, is my career path / how I became a criminal lawyer.

Phew! That was a long post! Feel free to ask me any questions you may have. I know from my instagram messages that you want to hear more about the law and my career, so I will try to do more posts like this.

Any career related posts in specific that you would like to see? Let me know in the comments below. One thing I am thinking of is a post on what I like and what I don’t like about my job as a criminal lawyer. Would you be interested in that?

6 Questions You Should Ask Yourself Before…

PREVIOUS POST
"The Perfect Floral Gown for Your Big Event"
NEXT POST
"How to Style Polka Dots for Spring/Summer 2019"
46 comments so far.

46 responses to “My Career Path: How I Became a Criminal Lawyer”