The 10 Most FAQ’s About Being a Criminal Lawyer

The reason I haven’t talked about it much is two-fold: one; this is my fashion/lifestyle outlet away from all things criminal law, and two, my somewhat irrational belief that I needed to keep things about my legal career separate from my blog. When I started fashion blogging I was terrified of anyone in the legal community finding out, but over time what has changed has my confidence in myself as a criminal lawyer has grown. When I was starting out I was so nervous about people judging me because I didn’t yet have a legal reputation, a client base, or the experience to have confidence in myself.

Now though, I am very comfortable and proud of who I am as lawyer. I think I’m good at what I do, and if other lawyers want to gossip about my blogging or if a client finds my blog and doesn’t want to hire me, I’m okay with that. I’ve got a good client base, I’m almost too busy, and I’m confident and happy in being both a criminal lawyer and fashion/lifestyle blogger.

That was a very long-winded way of saying that I’m finally doing what people have been asking me for, and talking about what it’s like to be a criminal lawyer!

Today I’m bringing you the 10 most frequently asked questions about being a criminal lawyer. These are all questions I get asked in real life, and I polled my instagram audience to ask about questions they had- and some form of every one of these questions was asked. So let’s get to it: 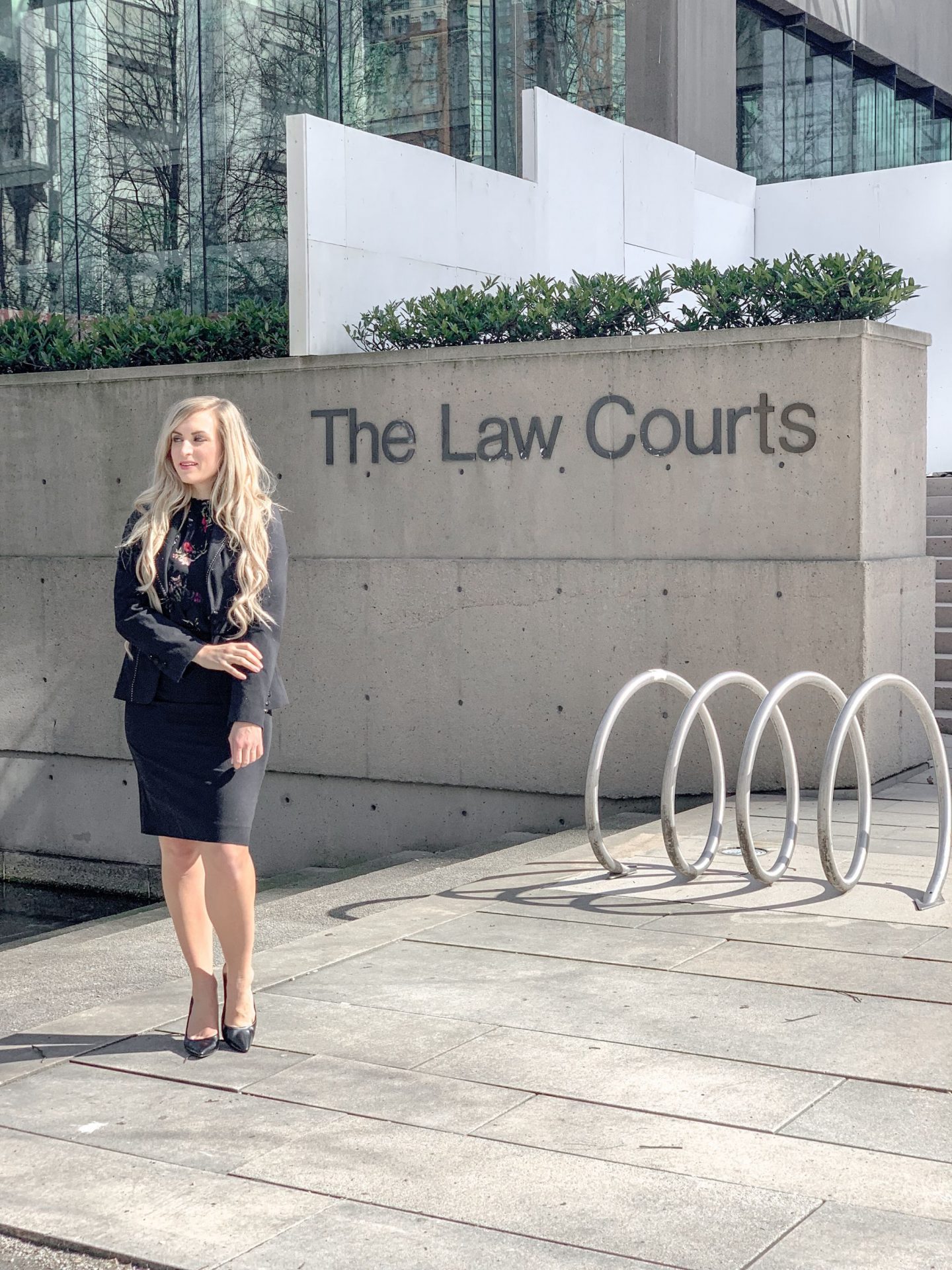 1. What made you want to become a criminal lawyer?

See my post on my career path for more on it, but basically I fell in love with it on the first day of law school.

I fell for it because it still had the ability to help people, but was so damn interesting. I love learning about forensics and the fact patterns in criminal law are fascinating. Also, I love the people! Criminal lawyers are our own weird group. I’ve never felt more comfortable in a group of people than I do with criminal lawyers. I think we’re all a bit jaded with a bit of darkness in us and it’s nice to find a community you so easily fit in with.

2. How can you represent people who’ve  done “horrible things”?

This is the first question people ask me 9 times out of 10 when I say I’m a criminal lawyer. The answer is far more complex than I give in a few short sentences, but in brief: who am I to judge? What I mean by that is: our entire justice system focuses on innocent until proven guilty – so it’s not for me to say that my clients “have done horrible things”; it is up to a judge to determine if they did or did not do something.

Secondly, even if I know they did a “horrible thing” because they admit the crime to me, I really believe that people are more than just one wrong decision. It may be the worst thing they’ve ever done, it may be repulsive to me, but everyone deserves to have someone on their side. There is something to be said for being the one person beside someone in their worst or most challenging moment. It does not mean I condone the behaviour in any way, but it does mean that I understand that there is a real person behind it all with all the complexities that com with.

3. What do you do when you morally can’t tolerate the crime of the client?

This ties in to the above question. For the most part, I focus on the client and the case and not the crime itself. That said, there is one particular crime I’m not comfortable doing because it does upset me so much. I don’t believe I would be the best person to represent someone charged with having done XYZ, and so I don’t take those cases. That said, it’s a really interesting and complex moral issue that we actually talked a lot about in the criminal intensive program in law school.

If, for example, you’re in a small town where you’re the only qualified lawyer, it becomes really difficult. Ethically can (or should) you say no to any case?? What if it means someone will have no legal representation?? Luckily, because I practice in Vancouver where there are a ton of criminal lawyers I don’t have to answer this question and can simply refer clients charged with XYZ to a colleague who I know is willing and better able to represent them.

4. Is it hard on you emotionally/mentally?

The biggest challenge about being a criminal lawyer is the impact it has on your emotional well-being. I don’t think as a community we have the resources we should. I think we should all be forced to go to therapy and it should be covered by health care (for example). It is certainly not normal to look at graphic, violent crime scene photos day in and day out, and I don’t think we have a full understanding of if/how that affects us. Most of us become desensitized quite quickly – it doesn’t bother me at all anymore when I look at bloody photos or evidence- and that in and of itself, is an ’emotional impact’, because I shouldn’t be as comfortable with it as I am!

The bigger impact on me personally comes from dealing with challenging clients. Many of our clients have severe mental illness and/or drug addiction and so I deal with a lot of verbal attacks and generally difficult behaviour. It’s very emotionally draining, especially because I genuinely do care. I’ve been screamed at for minutes on end, I’ve been physically attacked, and I’ve had to talk people out of hurting themselves. It can leave me completely drained.

5. Do you ever feel your safety is at risk?

As mentioned above, I’ve been physically attacked on a couple of occasions and as sad as it is, it’s just a risk of the job. I’ve never felt my safety is at serious risk though – it’s usually quite minor and we have court sheriffs around to help keep us safe. Usually it’s more weird/gross than hurtful – there was an individual in court a few weeks ago (not my client) who came up behind me and licked my hair. It was disgusting, but more horribly-hilarious than physically harmful.

6. What’s it like being a woman in a male dominated field?

I feel like this could be it’s own post (maybe I’ll do one?!) I did write a letter entitled “Dear Female Lawyers” which I think covers this a bit.

Overall, here in BC there are a lot of really ‘woke’ male criminal lawyers who are passionate about seeing us younger female lawyers succeed and are awesome at being resources to help us.  It is challenging though I think for female criminal lawyers to be taken seriously but not be called a b*tch. I was once told that “I have an angry walk” and I couldn’t help but think how sad it was that I was being judged by how I walked, when I don’t think a male colleague would have been.

7. Are there certain crimes/cases you won’t take?

As mentioned in question 3, there is one particular crime I won’t take because it is too hard on me to hear about it.

8. What’s the craziest case you’ve ever had?

I get asked this one a ton. I can’t talk about cases that aren’t public record (of course) so I can only discuss things that have been made public. As such, I usually think of the murder trial I did as the coolest/most intense case (husband murdered his wife) and the craziest case is one that was won by way of a DNA expert that disproved the evidence put forth by the Crown.

9. What is the hardest part about being a criminal lawyer?

The emotional/mental toll. Also the low pay from the government – just over half my practice is Legal Aid, and we are in a crisis point for Legal Aid funding in this country (BC and Ontario are both dealing with bad situations). We almost went on strike in the spring, but were given a temporary pay increase to hold us over during negotiations. These negotiations are ongoing, and I’m holding out hope that in the new provincial budget in November we’ll be given fair pay for the work we do. As far as “what it’s like to be a criminal lawyer”, it’s hard.

I love it so much because it fulfills so many aspects of my diverse personality. Criminal law is so interesting and every case is different so it keeps my ADD self interested. It also feeds my ‘bleeding-heart-social-justice-warrior’ side because I get to help people, and there is nothing greater than that.

I have a print out framed in my office of a text message I once received from a client. This client was thanking me for getting him/her into drug recovery, and  in it they go on to tell me that I’m not just giving people a chance, I’m saving lives. I’m not sure I’ve ever cried so hard upon receiving a message. I was so touched. It reminded me of exactly why I do what I do; and for every difficult client, for every challenging case, if I get to help one person then it’s all worth it.

5 Goals Every Career Woman Should Set…

Goal Planning ( aka. Succeeding Without Making…

PREVIOUS POST
"How to Prepare for the Nordstrom Anniversary Sale & Checklist"
NEXT POST
"Blazer and Shorts Sets – Your Summer Power Move"
38 comments so far.