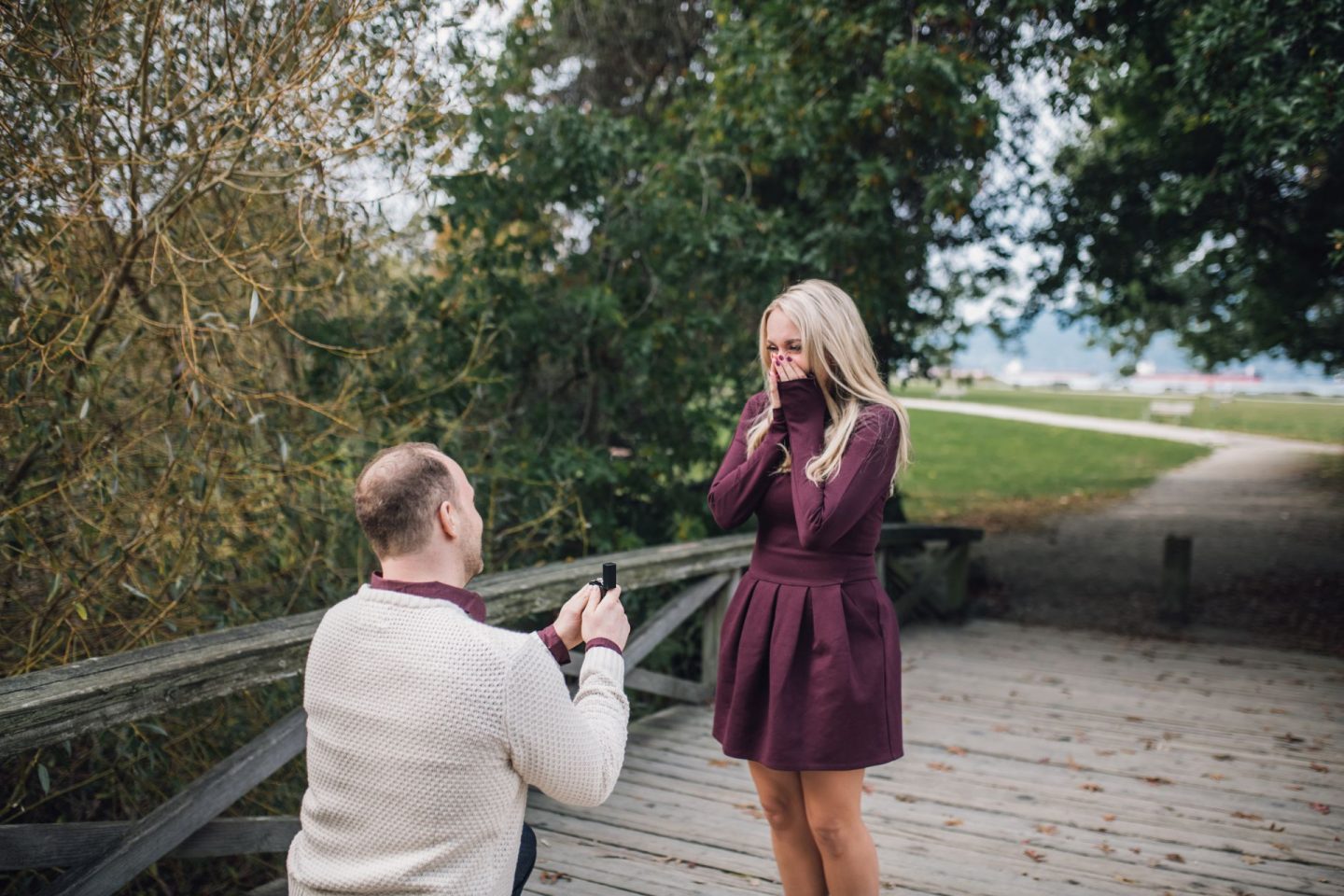 Here we go; my first “Wedding Wednesday” blog post! I finally sat down to write out the story of how Alex proposed / how we got engaged. Reader warning: do not not read on if you don’t like sappiness. Or love. Or me being a confused-mess-of-a-human. Got it? Good. Moving on –

In case you missed it, Alex & I are engaged! Some of you may recall that last month I had a couple’s photo shoot planned with a local wedding photographer. The photographer, Laura Olson, shot my friend Sarah’s wedding in February and had reached out to me afterwards on instagram about collaborating to build up her portfolio of non-wedding couples photos. I loved her work so I jumped at the chance and immediately said I was interested.

Then this little thing you may have heard of called COVID-19 decided to grace us with it’s presence and that kind of pushed the whole photos plan and it fell by the wayside.

Fast forward 6 months and Laura reached out again suggesting we plan a photo shoot now that things had calmed down a bit. Little did I know that in the intervening 6 months Alex had messaged my friend Sarah to get Laura’s contact information and Alex reached out to Laura.

Words cannot describe the amount of sneaky behind-the-scenes effort that Alex put in to this. While Laura and I were texting about her concept for the photo shoot and what outfits would work for Alex and I she was actually taking her cues from Alex and sharing what he said to say. At one point I sent Laura three outfit photos to ask which would be best, which she in turn sent to Alex to get his opinion. Alex told her to to tell me the burgundy dress outfit, which as you can see from the photo above is what I went with.

Let me tell you, leading up to the photo shoot I was a   S T R E S S   C A S E  because of work stuff and feeling too busy and overwhelmed to find our outfits and fit the photo shoot in. I knew Laura wanted 2-3 outfits for the shoot and so I was spending a fair bit of time trying to style multiple outfits for Alex and I. At one particularly ridiculous moment of hating everything I was trying on I said to Alex, “Whatever you do just never propose to me while I’m wearing neutrals!” 🤣 He now tells me he could barely keep a straight face when I said that and was just thinking “Oh I am going to hold this moment over you forever” 🙊

The day of the photo shoot finally came .. and unfortunately it was pouring rain. We rescheduled for later in the week. By now my fellow Vancouverites should have a sinking feeling in their stomach knowing where this story is going … On our rescheduled date? Rain. Next date? Rain. Welcome to fall in Vancouver folks! Finally on what I think was our 4th attempt we got a beautiful sunny day and Alex and I headed out to meet Laura at Jericho Beach in Kitsilano; one of our favorite neighbourhoods.

There were so many moments in the month of planning this where Alex says he ‘slipped up’ but I was completely oblivious. Same with the day of. We headed out and I knew we were shooting at Jericho beach. We got in the car and Alex started driving. He tells me a few minutes in he thought “Oh s**t, I’m not supposed to know where I’m going!” He says he tried to play it cool and just said “oh hey, we’re getting out of our neighbourhood, where am I going for this shoot?” He was worried I would have been suspicious but I didn’t even realize or think about the fact that he was driving despite not knowing where to go! oops!

Once we got to the beach we met Laura and began looking for locations in the park beside the beach that had ‘fall vibes’. We stumbled across a really pretty footbridge over a pond filled with ducks. Laura had brought props (again I thought this was for her stylized shoot) and she started setting up. She then posed Alex and I and we started taking photos. We spent probably 10-15 minutes taking pictures and everything felt like a normal shoot where someone else is directing – she was angling us, getting us into certain poses etc. Then as we were moving poses she said that she wanted to take some shots of just me and asked Alex to step to the side.

Laura was taking pictures and of me and of course I was just focused on that. What I didn’t know is that while I thought Laura was just taking pictures of me, Alex had secretly moved in behind me and was on one knee so really Laura was photographing us. 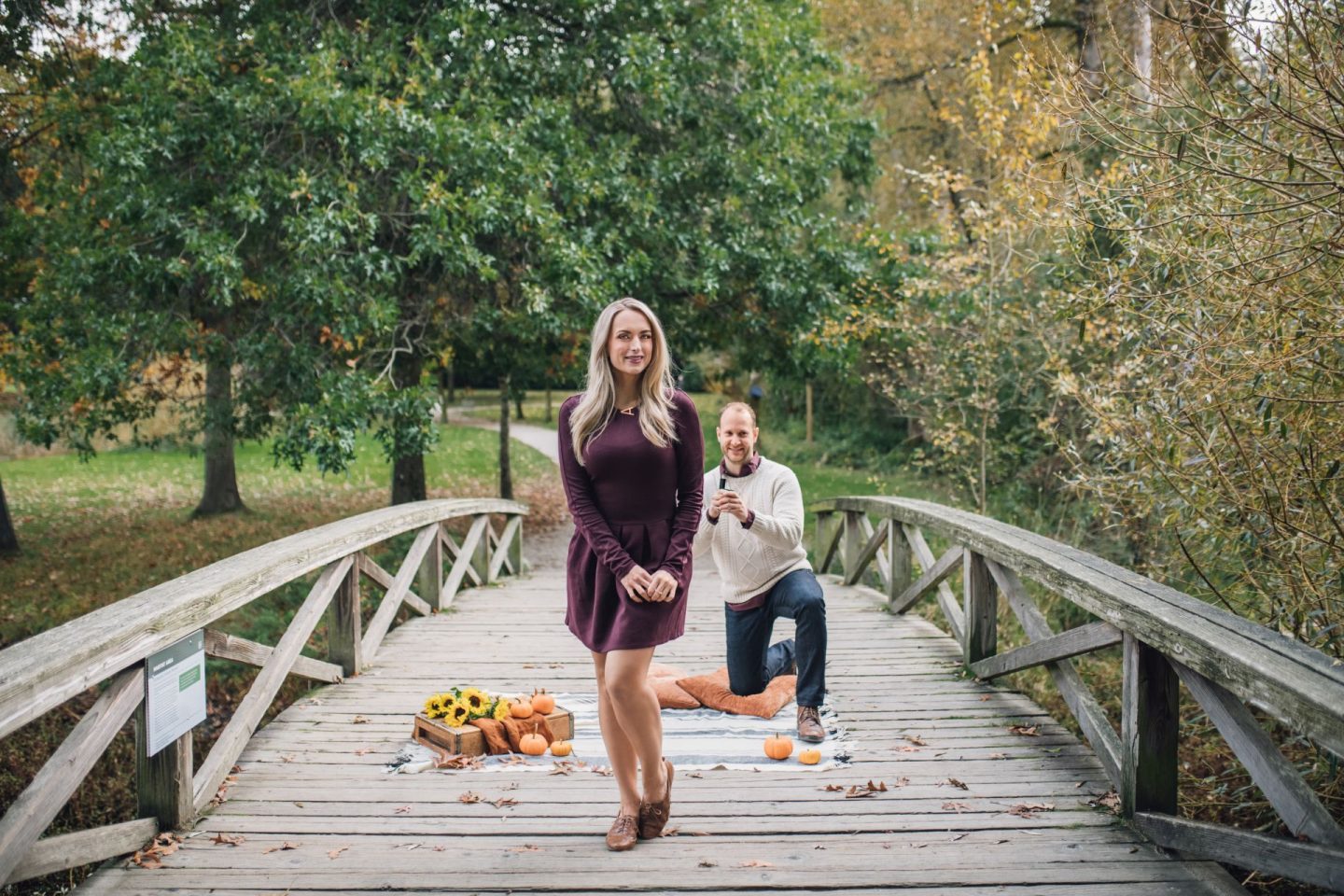 After a minute or so Laura told me that she liked the trees in the background, but that she wanted to see if the other direction, in which you can see the beach/ocean, made for a better background.  She asked me to turn around.

I remember saying okay and babbling on about something while turning. Then I had this weird sensation/feeling of Laura running beside/around me. I remember thinking, ‘why is she rushing?!’

I then remember hearing the camera clicking sound going off like crazy and being just as confused by that. I had done a complete 180 and was facing the other direction before I even noticed that Alex was there, and that he was on one knee.

When I saw Alex I had no idea what was happening. I stared at Alex for a moment and then got annoyed. I realize how that sounds, but bare with me! The thought process in my mind was:

“Oh hey Alex is over there”

“Wait, Alex is on one knee”

“UGH Alex, this is NOT A COOL PHOTO IDEA”

What I thought was that Alex was trying to be helpful (so sweet) and trying to think of poses that Laura would want to capture, but then I thought “ugh babe this is not a good pose”. I then said to Alex something along the lines of “What are you doing?!”

He didn’t move and I guess that’s when I realized??

I said “are you serious right now??” to which he said yes. He then said some sweet things that will stay between us and, of course, ended it with “will you marry me?”

I was so shocked. I knew we would be getting engaged at some point soon – we’d talked about being engaged by the end of 2020 – but I was so focused on what I thought was work that day (the photo shoot) that I was caught completely off guard.

Alex actually warned Laura that might happen. He told me after that she asked whether she thought I would cry or what I might do (so she could be prepared photo wise). Alex told her that he wouldn’t be surprised if he actually had to say to me “This is a proposal. I am asking you to marry me”.

After he proposed and put the gorgeous ring on my finger (for more on the ring, head to my instagram stories – I’ll save them under my ‘engagement’ highlight!) We spent a few minutes just taking it all in and Laura snapped some great photos of us without me realizing. We were 100% in our own little bubble. 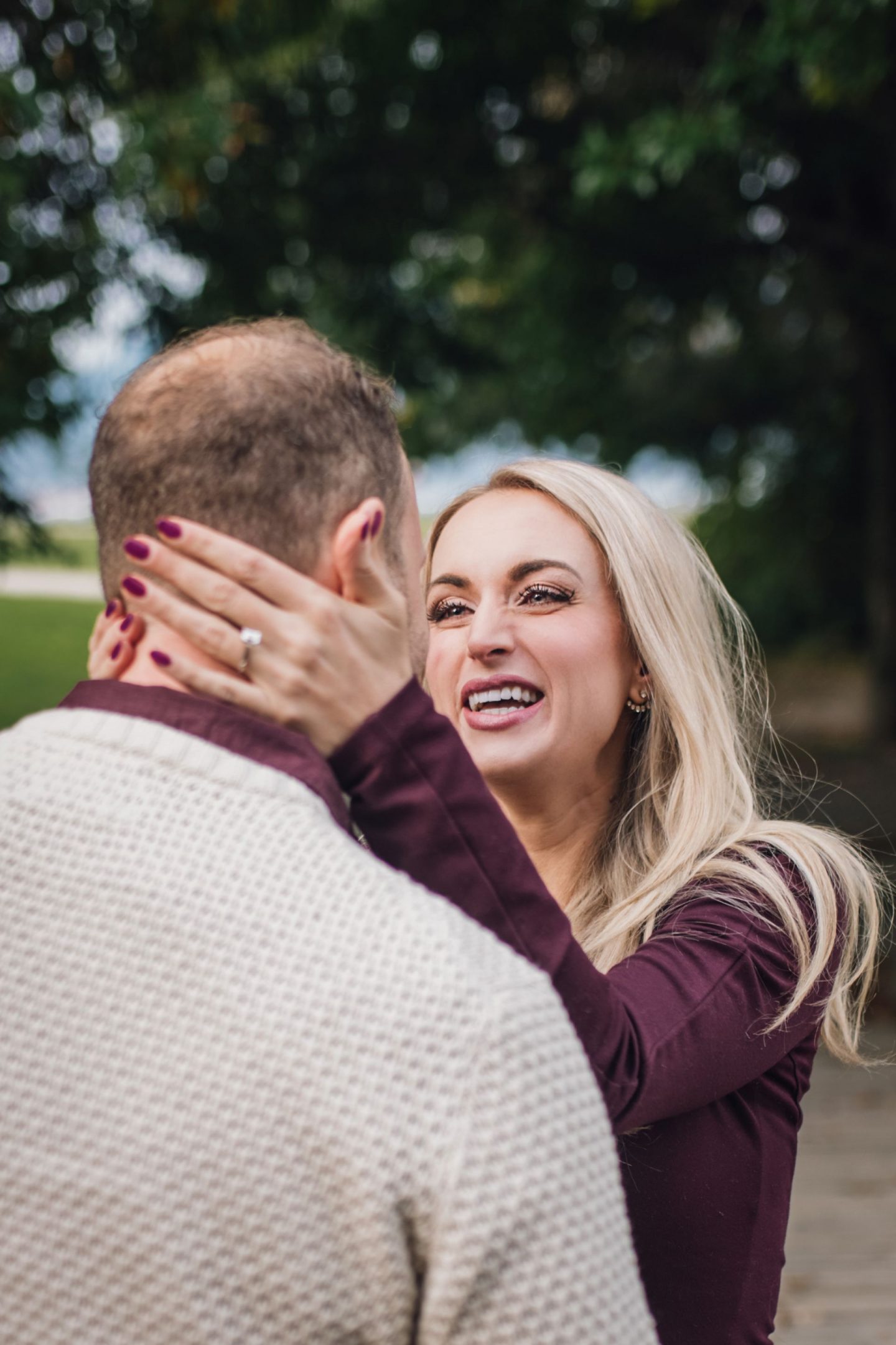 Once I mentally checked back in to what was happening / where we were, I started (jokingly) getting mad at Alex and Laura and calling them out for all their trickery. Alex let me know that the outfits part wasn’t actually a trick and he had us bring another outfit so that we could do an engagement photo shoot with Laura.

Since we knew we wanted to get married summer 2021 I knew we’d be on a tight timeline to get engagement photos done once we were engaged so that we could have them and use them for save the dates. Alex knew that was a concern I had so he made sure we had this time to take photos. Engagement and engagement photo shoot all in one.

Alex brought a bottle of champagne and so we popped that and spent the next hour or so taking photos with Laura. Alex and I both feel comfortable in front of the camera so we just had a lot of fun with it and I just remember laughing a ton.

After the photos we headed home for some time to unwind. Alex had booked a reservation at an amazing restaurant for dinner so we headed there to finish off our day; FaceTiming my best friend Maddie and my sister Sarah in the meantime.

I’m still in awe of everything Alex did and the fact that he pulled this off. It was a perfect day for us.

And now the wedding planning begins! It’s been stressful planning in a pandemic (obviously) but we’ve been taking it in stride and finding joy and laughter where we can. At the end of the day all that matters is that I get to marry this amazing man. I can’t wait to become Mrs. B!!

Thanks for reading our proposal story and following along with Alex and my journey. I’ll be sharing Wedding Wednesdays here on the blog and, in the meantime, if you missed it here is a Relationship Q&A post that Alex and I did this summer!

Our Engagement Photos & 10 Tips from…

PREVIOUS POST
"The Ultimate Gift Guide for your Husband / Partner"
NEXT POST
"50 Gift Ideas for Your Mom or Mother in Law"
30 comments so far.

30 responses to “Our Proposal Story”