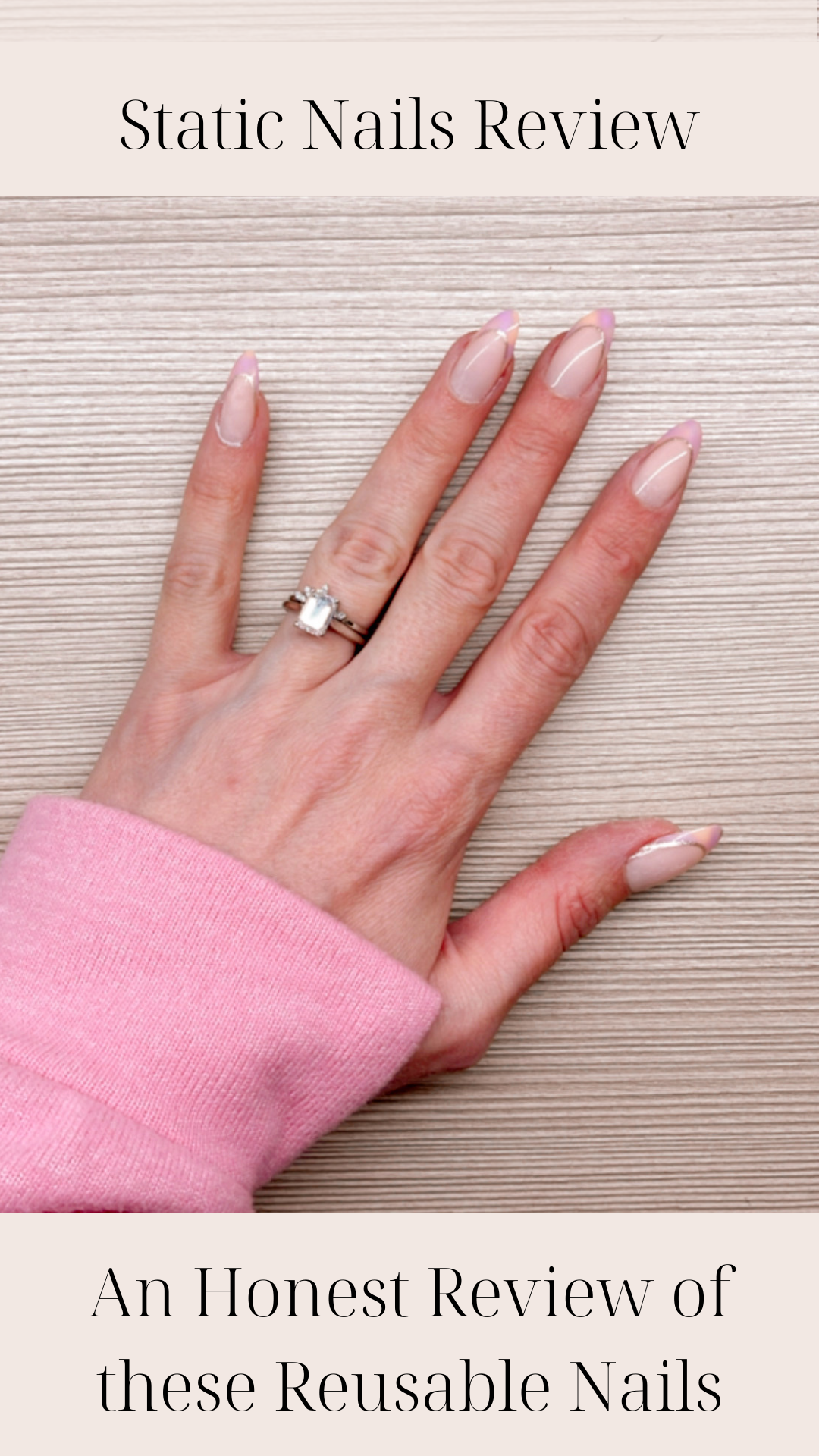 I was influenced by instagram and tiktok to try out Static Nails – the reusable or ‘pop on’ nails that are blowing up the internet. Of course, I couldn’t try these out without giving all of you a fulsome, honest review. So let’s get to it! 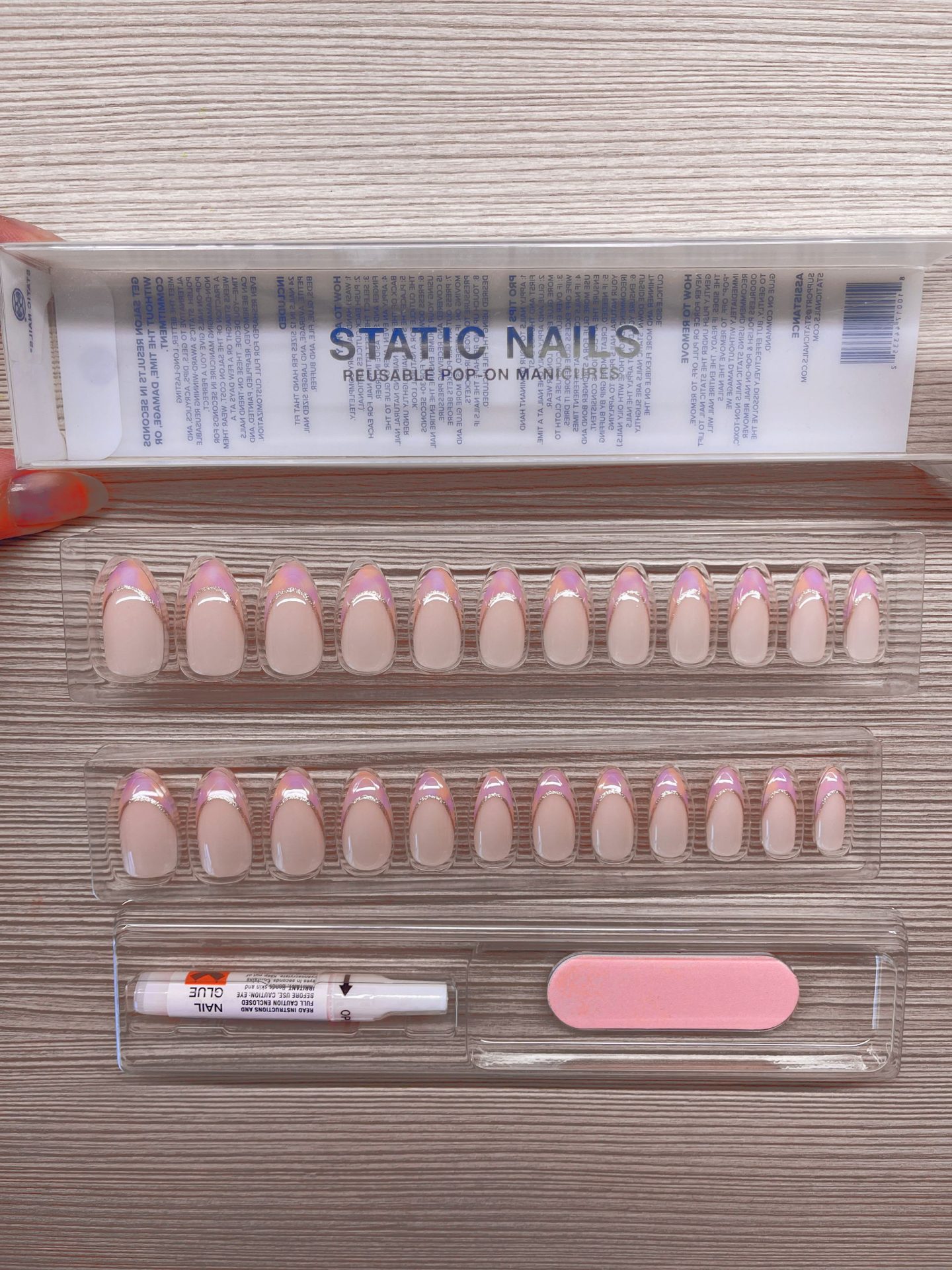 I ordered two packs of Static Nails, wanting to get a fun pattern for spring in an almond shape and a neutral color in a round shape. I got this tie-dye style french mani and these taupe ones.

Each package of Static Nails is between $20 – $24, making them far more expensive than drug store press nails, but way cheaper than a salon manicure and – in theory – being reusable means they’re a great deal.

My order shipped really quickly and arrived in just over a week (and remember I’m shipping to Canada!)

Pictured above you can see everything that comes in one packet of nails. I like that they have 12 size options (24 nails in all) to give you the best chance of a perfect fit. They also give you a file and their (supposedly) unique glue formula that allows the nails to have this reusable, no damage effect. 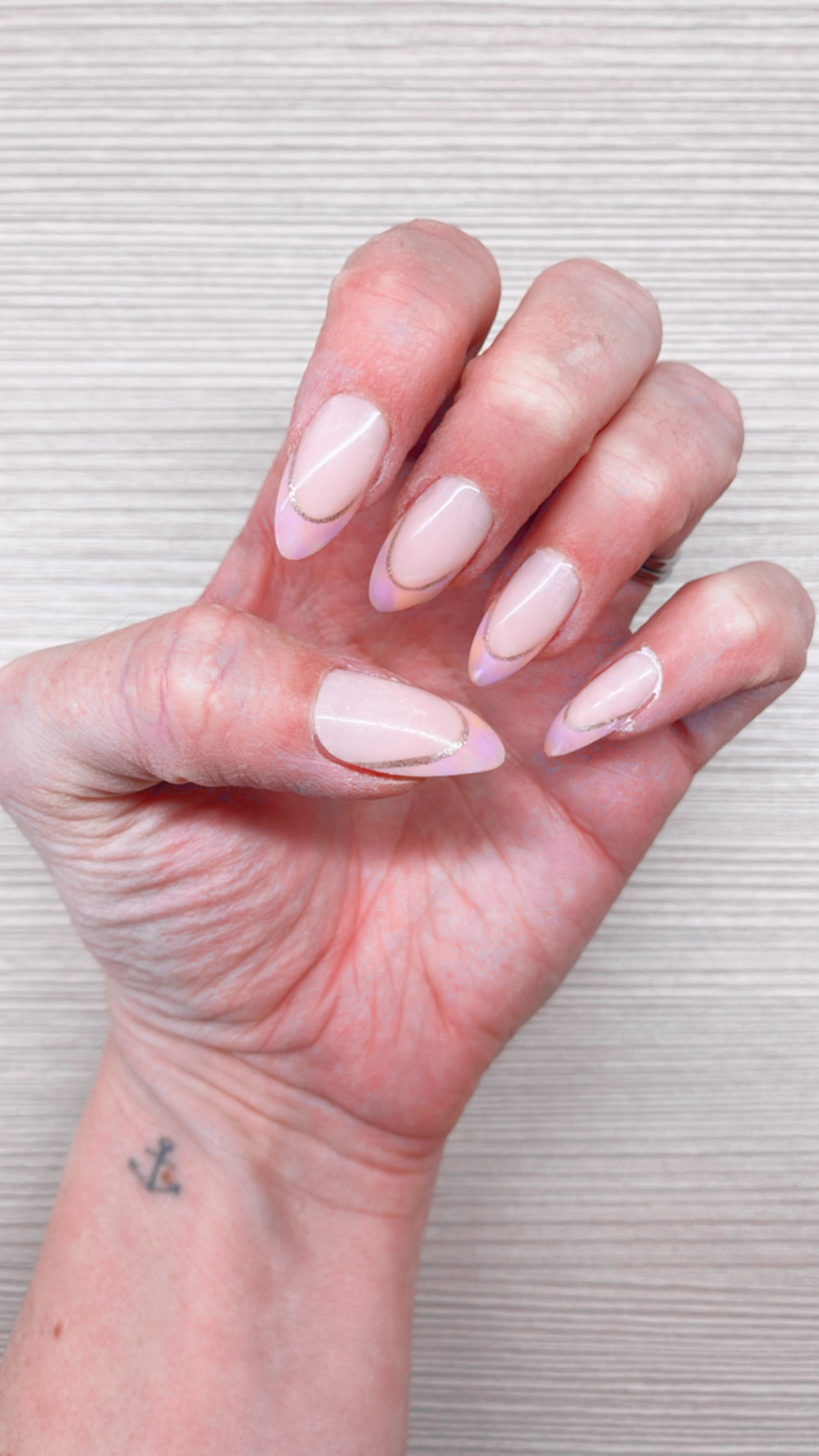 I really like how these nails look on.  … Unfortunately that basically ends the things I like about them.

These made SUCH a mess. the pads of pretty much every finger were covered in glue by the time I was done. Static Nails gives you a guide on how much glue to use based on how long you want them to last so I went with the longest (10-14 days) which meant applying a thin layer to the fake nail as well as your real nail. This was a disaster and fail #1 for Static Nails.

Fail #2 for Static Nails … they didn’t last! At all! I’ve had them on now  for just over a week and here is the history of nails popping off:

To be honest I am *shocked* at how terribly these nails stay on. They are way less secure than the sticker back ones I love (I usually loose 2 nails total over the course of two weeks and reattach them with glue). They are also less secure than the traditional glue on nails I’ve tried which on average have lasted me 4-5 days before loosing any nails.

What also surprised me is that because they are designed to pop-off and not damage the nail, unlike other press-on nails, you don’t feel them starting to get loose. With every nail I lost I had no idea I lost them and just looked down and saw them gone. I think this is one of the biggest problems with them since the whole purpose (and justification for the price) is that they are reusable. … They’re not so reusable though if you loose the nails!

To end my Static Nails honest review here’s a summary and a star rating:

Summary: These nails look great, but don’t last as well as regular press-on nails and can be difficult/messy to apply. Only buy them if you’re okay with this.

If you’re someone who already likes glue on press-on nails, and is good at applying with glue:

If you’re not a nail glue expert:

Overall, if you’re gifted a pair of these nails, or you’ve already ordered some, they’re worth using just be prepared to need to fix them up a lot. If you don’t already have them? Save your money and order some impress press-on nails or get a salon shellac manicure instead.

PREVIOUS POST
"My Favorite Brands for Newborn Baby Clothing"
NEXT POST
"We Bought a House!"
20 comments so far.