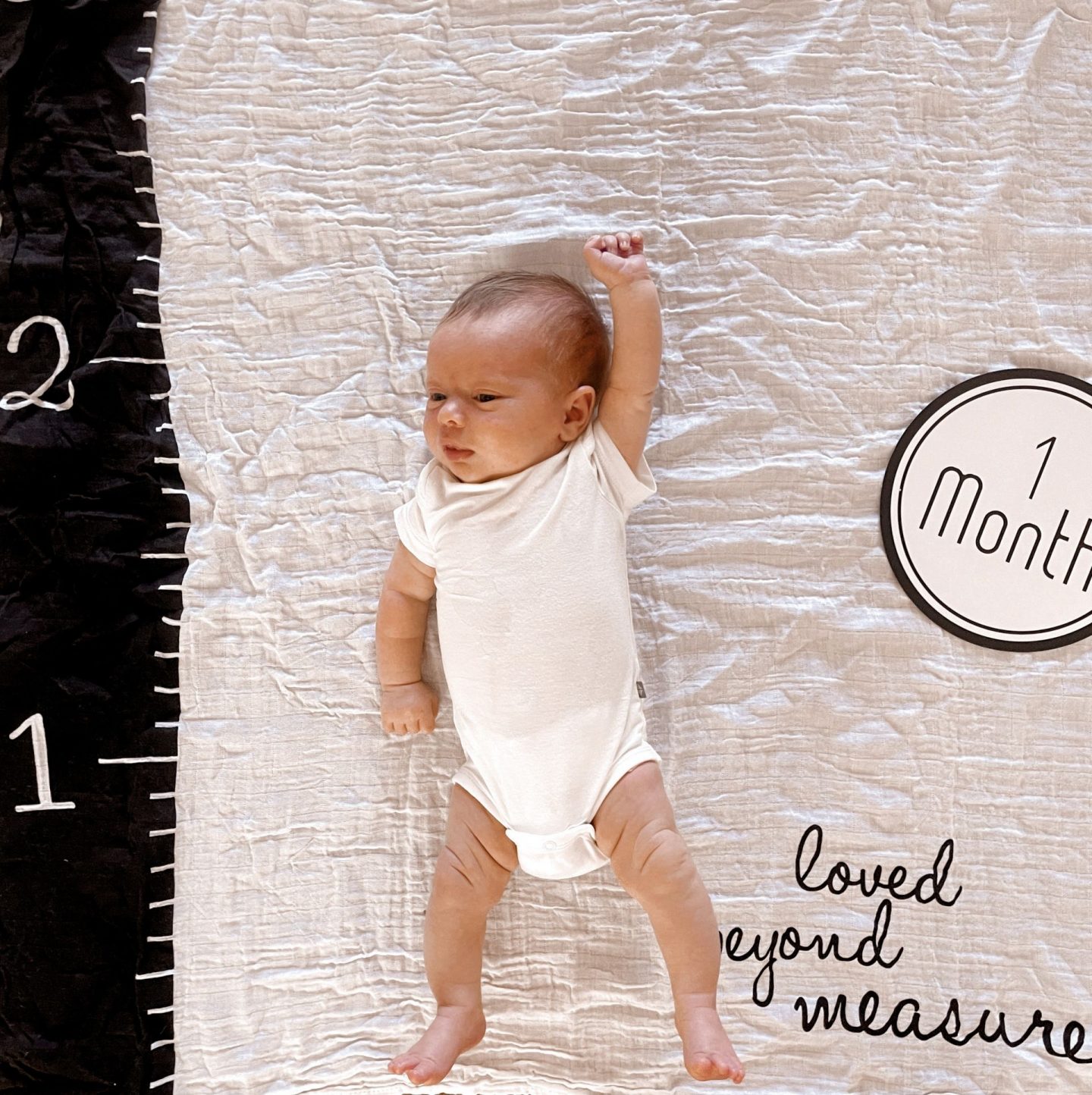 I feel like I blinked and Oakland went from 1 day to 1 month old. It’s genuinely so hard to believe that he’s been with us for a month. It’s true what they say about time flying, but it’s also been such a surreal experience to me where it almost feels like it’s all been one really long day lol. I’ve learned that time has very little meaning when you’re nursing a newborn!

I thought I’d share a quick one month update both on baby Oakland and on what the past month has been like for me. Thank you all for bearing with me as I’ve been navigating motherhood, I know I’ve posted way less here on the blog and on instagram! I’m hoping over this next month to get back into a more regular routine. For now though, on to the one month update! 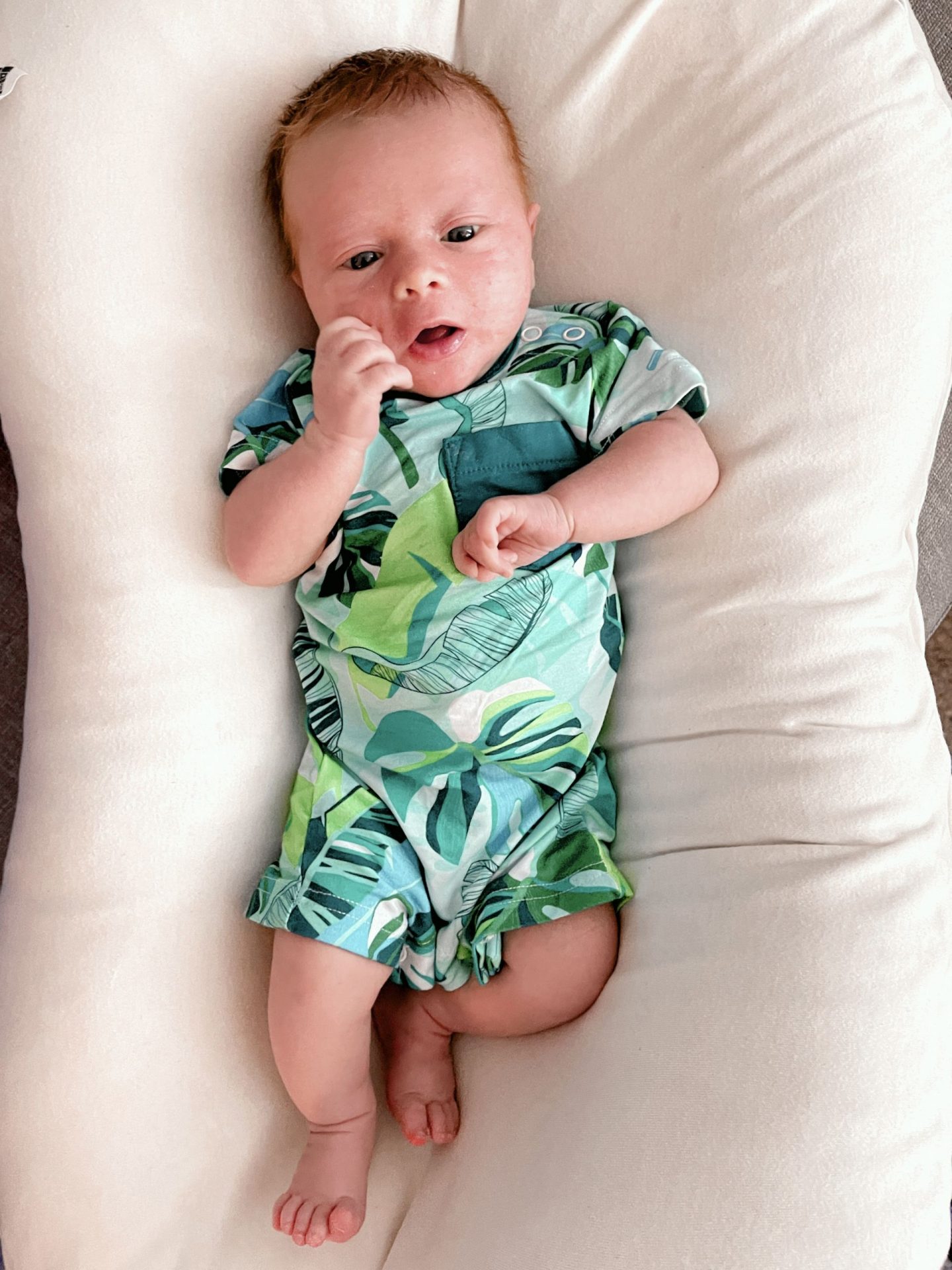 Oakland has been changing practically daily this past month which has been a wild ride for Alex and I. One day he sleeps well, but isn’t the best eater and the next day that’s the opposite. We’ve been told this is common for newborns so we’re just riding the wave and getting to know this little man’s likes and dislikes each day.

Some things that have stayed the same / are clearly part of his personality and obvious even at one month old are:

1. He’s an old soul. Everyone whose spent time holding him has said the same thing. It’s so interesting that so many different people have come to this conclusion, and I think its because he just has the sense of calm to him. He has this aura that I can’t really explain, but basically when he’s alert and looking around (which is often) he seems so content with the world. So aware of it.

2. He’s a water baby. This kid LOVES the water. I was nervous to give him his first bath since I know many babies hate baths (apparently both Alex and his brother used to scream the whole time!) but Oakes loves the water! I’ve quickly learned it’s actually one of the best ways to settle him if he’s crying or upset. He gets in the water and immediately calms right down.

In terms of physical updates, the incredible head of hair he was born with is still going strong. It’s changed color a bit over the last month though, going from dark blonde to a blonde with red undertones. It’s starting to look like there may be full on red hair coming in which is SO cool! No one on either side of our family is a redhead so we have no idea where this comes from, which makes me like it even more. Oaksey’s already being his own little person!

He’s also put on a ton of weight! We had his one month doctor’s appointment this morning and he’s up to 8 pounds, 12 ounces. His birth weight was 7 pounds, 7 ounces and because of his blood disorder he had dropped down to 7 pounds so this is HUGE! Speaking of his blood disorder, I’m relieved to say it’s a non-issue anymore. Doctors say his body has officially rid itself of the anti-bodies my body had made against his blood and so there will be no future issues for him in this regard.

I think Alex and I have been handling the first month pretty well all things considered! I feel so lucky to have Alex as a partner; he has stepped up in ways I didn’t even know were possible and has been such an incredibly hands on dad. The main struggle I have is definitely the lack of sleep. I am so tired that some days I feel like I can barely see straight! I know this time will pass and I’m just trying to do my best to be in the moment enjoying Oakes when I can and surviving off of coffee.

My mom arrived from Ontario over the weekend and having her here has been such a god send. As you may know if you follow me on insta; Alex and I took possession of our new house on Friday! Moving with a 1 month old is no joke and so having the extra hands on deck has been amazing. We’re about 80% moved in at this point, so hopefully by Thursday or Friday we’ll be completely moved in. We kept our old apartment and are renting it out furnished so the main challenge we have right now at the new house is that we have almost no furniture! We’ve slowly been ordering things but with shipping delays we don’t have much. Luckily Oakland’s stuff is set up (glider and snoo bassinet) but other than that Alex and I are sleeping on a mattress on the floor, as is my mom. We also have no couch or chairs so have been sitting / eating on the floor. Again, not ideal with a 1 month old but we are making it work!

As you guys know I’m a bit of a workaholic / have a hard time doing nothing so the main thing I’ve been working on this past month is not overbooking myself and giving myself grace for not getting stuff done. Case and point: the lack of blog and instagram posts!

How did you come up with his name?

To be honest, neither Alex nor I can remember! Friends and family keep asking us as well and the best we can come up with is that we were both looking at tons of baby name websites and trying to find a name and at some point I stumbled across “Oaklyn” which I thought was kind of cool so I added it to our shared iPhone note of potential baby names. While we both liked the name it wasn’t perfect and it just sat on our list of maybe names for boys (we had about 8 names on the list). At some point we stumbled across the idea of turning Oaklyn into “Oakland” and we both knew immediately that was the one. We also both really liked the sound of “Oak” and “Oakes” as nickname possibilities as he gets older (we call him Oakes all the time now, and to me Oak sounds like something he may want to go by as a teenager / young adult.

I answered the first part above; I’m so thankful the blood disorder is resolved. As far as his tummy, we still have problems with him being really gassy and uncomfortable. A few things we’ve been trying that are helping a bit at least are giving him 1ml of fennel water twice a day (it’s basically a natural gripe water), doing lots of leg exercises to help his tummy, and feeding him in different breast feeding positions designed to ensure he gets a slower flow with less air. As I said these are helping a bit, but the poor kid definitely still struggles with his tummy.

To me he just looks like himself, I can’t really see much of either Alex or I in him. However, everyone tells me he is pretty much a mini Alex lol. I don’t see it, but if others do I think that’s awesome!

How are you adjusting to becoming a mom / what are you struggling with?

I love being a mom. I’ve known I wanted to be a mom since I was 5 years old so it all felt very natural to me. I love being his mom and knowing I get to love him and protect him and watch him grow for the rest of my life. He’s just my perfect little angel and I feel so blessed getting to be his mom.

The only thing I’d say I “dislike” and am struggling with is the constant breastfeeding. I’ve always said I wanted to exclusively breastfeed, and I am, but honestly I didn’t realize how much work that would be and how tiring it would be physically and mentally. Alex jokingly calls me “La Muca” (the cow in Italian) and that’s definitely how I feel most of the time. He breastfeeds every two hours at this point and we haven’t started on bottles yet so he’s literally on my boob every two hours and I’ve found that really draining. Also dealing with the breastfeeding issues when he isn’t breastfeeding (worrying about supply, eating lactation inducing foods, monitoring what I pump, dealing with leaking, etc) has been a lot for me.

Actually the other thing I just thought of that has been hard for me is dealing with his crying. I kind of forgot about this one as it’s SO rare that Oakland cries. Obviously he cries all the time to signal a need (needing to eat, wanting to be picked up etc) but that crying stops the moment you fulfill the need so he basically never cries for more than a minute. That said, one time when his tummy was really bad he cried for 15 minutes straight and I realize in comparison to a lot of babies that is nothing, but I found that unbearable. I’m not sure if it’s my neurodivergent brain or what, but I have always had major issues with sound and the sound of him crying is genuinely like torture to brain. Thankfully as I said he cries so little, but it still is something I’d say I’ve struggled with in adjusting to motherhood.

Finally the main thing I’ve struggled with in his 1 month of life is self-confidence! I constantly worry that I’m doing the wrong thing or making the wrong choice for him. I thought I was a worrier before I had a baby but MAN I had no idea what worry really was lol. I’m working on trusting my gut and not playing the comparison game with other mothers but it’s a work in progress that’s for sure.

I’m writing this at 6am while Oakes naps on me and I may be half asleep so I hope this has all made some semblance of logical sense haha. Overall, this has been obviously the most life changing month I’ve ever had and it’s been equal parts exhausting and bursting with love. I can’t wait to see what the future holds for Oakland and I am so grateful that because of him my life is now on this incredible adventure. I’m looking forward to the next few months! 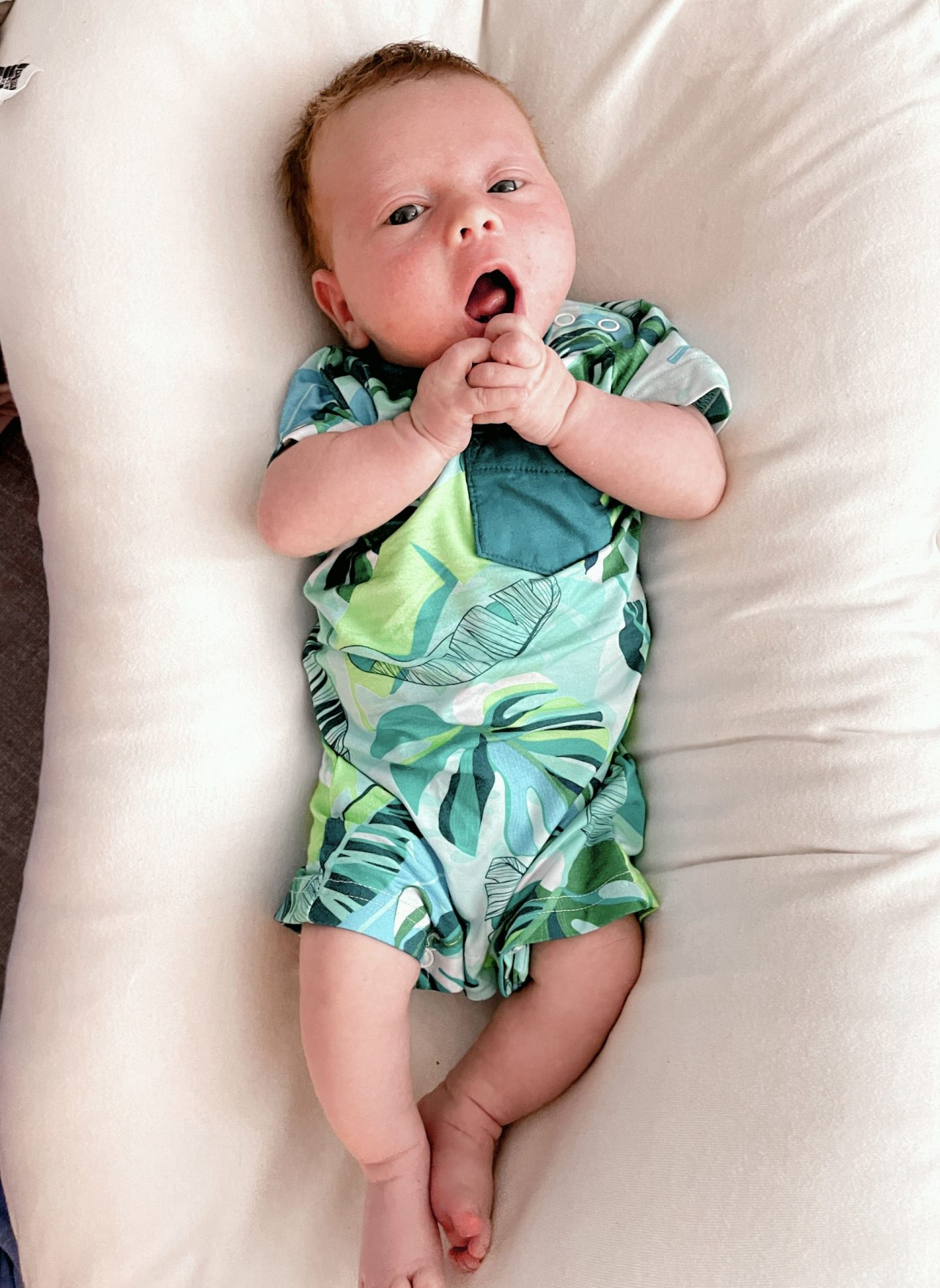 29 Things I Know to be True

6 responses to “One Month Baby Update”