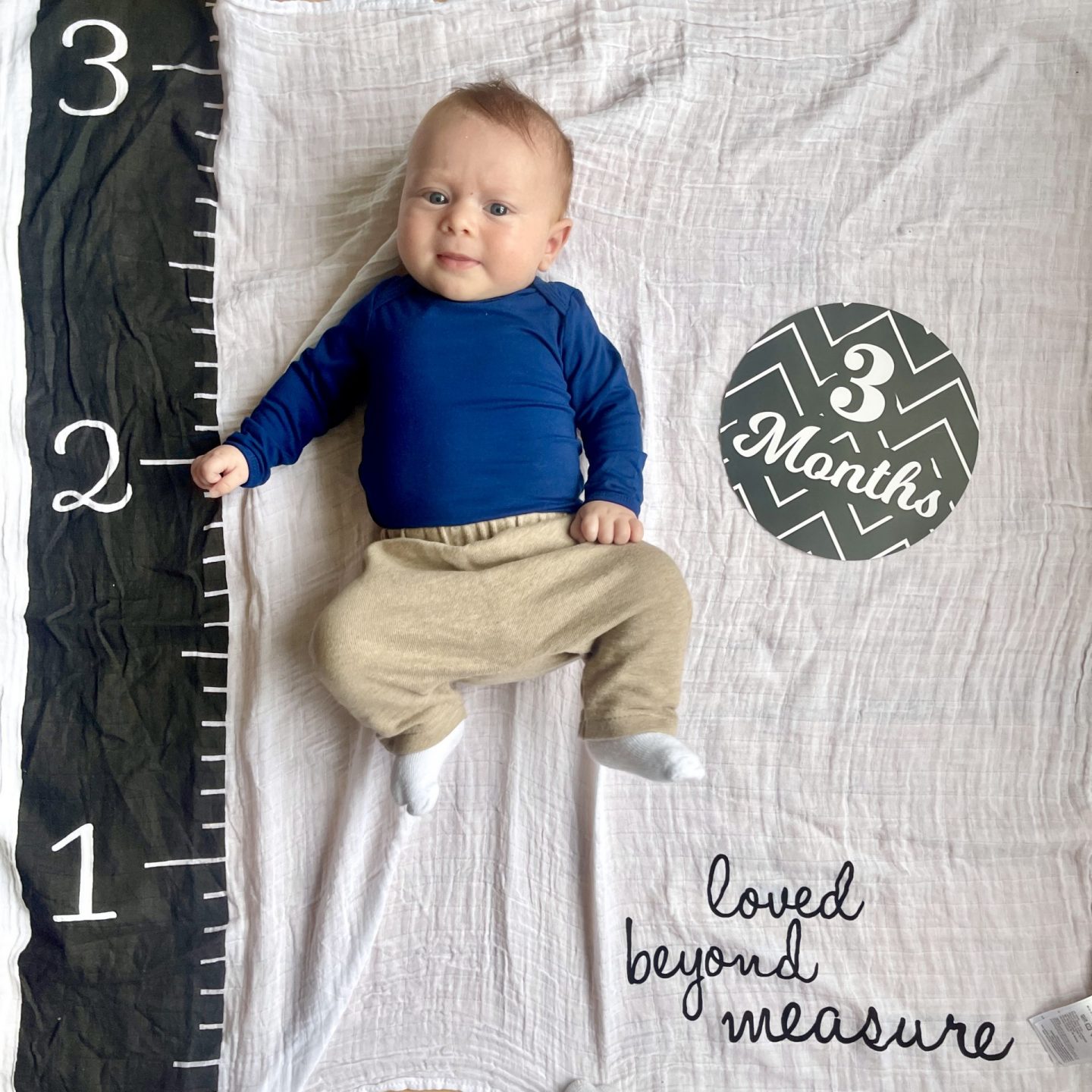 Oakland is three months old! My little Pokester (more on that nickname below) has changed so much over this past month and it’s been amazing to watch him grow. Here’s a short update on what’s been going on with us and what Oakland is like at three months old!

Oakland is starting to develop such a little personality and it’s my favorite thing ever! He’s seriously the happiest baby I’ve ever met. In his whole life he’s cried maybe 4 times for anything other than being hungry or having a gas bubble. I feel like he’s already got Alex’s happy go lucky personality and I am here for it!

Oakes’ is more like me though in that he’s definitely a morning person! He wakes up with the biggest smile on his face and spends the first hour or so of the day just smiling and chatting up a storm. He’s really vocal at this point, making a ton of different coos and sounds.

The one thing he’s not a fan of right now is tummy time! Thankfully he’s got really good head and neck control (he holds his own head up now) so we haven’t been too worried about getting in the recommended 15 minutes of tummy time every day. We still do make him do some tummy time, but usually will flip him over after 3 or 4 minutes when he starts grumping at us.

I feel like Alex & I have *finally* stepped out of the newborn fog.

Oakland’s started being somewhat regular with his sleep; usually going down for the night between 9 and 10. He then does a 4-ish hour stretch, wakes up to eat, and then another 4-ish hour stretch. He is still so loud when he sleeps (lots of grunting and kicking) making it challenging for Alex & I to get any sleep, but I think we’ve found a solution that works for now.

Alex takes the first 4 hour stretch while I sleep in the spare bedroom – which we’ve taken to calling “the sanctuary” lol. Then when Oakland wakes up to eat Alex and I switch rooms. I feed Oakes’, put him in the Snoo and then spend the second stretch in the room with him. This way Alex and I can each get one uninterrupted stretch of sleep. We’ll be moving Oakes’ to his own room around 5-6 months, so this works for now!

As you know, we’re in Ontario right now so we can spend time with family and friends here while Alex & I are both on leave. It’s been the absolute best couple of weeks doing just that. We see my parents and brother, sister-in-law and their two girls (age 7 and 2 1/2) almost every day. The 2 1/2 year old, Winnie, is Oakes’ closest in age cousin so I’ve really enjoyed seeing them together. Winnie loves him so much and loves to rub his head and say “Good Oakland, good Oakland” 🤣

We’ve also been able to spend a ton of time with my bestie Maddie and her daughters Adelaide (age 13), Lila (age 9) and Presley (age 3 1/2). They all love him so much and it’s been so special to see how each of them interact with him.  I know Oakland’s way too young to remember all of this family & friend time, but personally I think that subconciously / developmentally it’s affecting him. Being this surrounded by all these people has to be good for him and I think will help him foster connections with everyone when he’s older. I’ve also loved being able to see my nieces and Maddie’s girls interacting with him – my heart is so full!

Speaking of Maddie’s girls: Presley woke up one morning and was going on and on about going to see “Pokey” and Maddie had no idea what she was taking about. Eventually she asked Maddie if just they were going to see Pokey today or if Ads and Lila were coming to and it clicked for Maddie and she said; Do you mean Oakland? to which Presley responded “Yah! Pokey!!” Ever since we can’t stop calling him Pokey, the Pokester, Pokeritto, etc. Not a nickname I ever would have thought of for Oakland LOL but we just love it!

This month Oakland had so many “firsts” – his first time in a swimming pool, his first apple picking and his first hike through my parents woods.

The next month ahead should be even more fun! October is my favorite month; and we’ll get to take Oakes’ to his first fall fair, his first thanksgiving, of course Halloween! I’ve got 4 outfits planned for Oakes for the various Halloween activities we’re doing. Stay tuned for that!